We have a deeper understanding of the cells now than ever before. With the increase in our understanding of cellular biology and of the molecular signatures of cells, the need for concomitant development of tools to interrogate them and understand their intricate relationships has also increased. Flow cytometry is a powerful technique for immunophenotyping and analyzing distinct cell populations. The advancement in dye development technologies has enabled an exponential growth in the number of available fluorochromes for flow cytometry in recent years.

Instrumentation capabilities have also increased alongside, expanding the number of lasers and detectors, as have the number of measurable parameters. But as the complexity of instruments and the availability of fluorochromes have increased, so have the challenges associated with designing flow cytometry panels. The complexity entailed designing panels by meticulously studying the range of the spectrum defined by the filters for each fluorophore and picking the right fluorophores to avoid fluorescence spillover and spread. Thus, fluorochrome development was largely restricted by the range of emission spectrum collected by the filters.

Relationship between fluorochromes and detectors

Development of new fluorochromes that have distinct spectral signatures

The ability of spectral flow cytometry to examine the entire spectrum has led to the development of new dyes with distinct spectral signatures that can be exploited to obtain better resolution and more granularity for high-parameter analyses. This inspired the innovation in the development of a new dye technology from BD Biosciences.

The newly introduced BD Horizon RealYellow™ 586 (RY586) Fluorochrome is the first in the family of BD Horizon RealYellow™ and RealBlue™ Reagents that leverages next-generation BD dye technology and AI-guided fluorochrome selection to optimize spectral positioning to deliver reduced spillover and optimal resolution when used with other fluorochromes. This enables its use alongside dyes that have high cross-laser excitation, such as phycoerythrin (PE), on spectral flow cytometers. 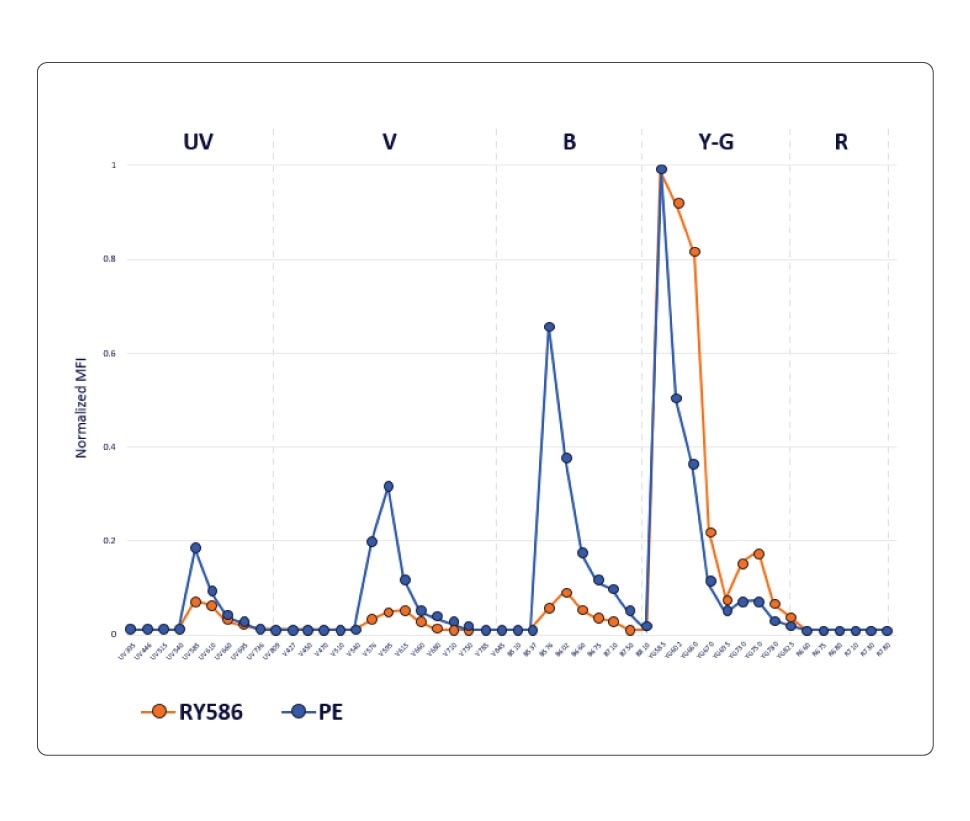 However, the differences between PE and RY586 can be easily detected and resolved on a spectral flow cytometer, thus enabling the simultaneous use of these two fluorochromes. The ability to use RY586 along with PE on a spectral flow cytometer increases the number of parameters that can be measured. This is significant, especially in high-parameter analysis, where the addition of one more marker will allow for more granularity in results and can facilitate gleaning deeper scientific insights.