The monoclonal antibody was purified from tissue culture supernatant or ascites by affinity chromatography. Store undiluted at 4°C and protected from prolonged exposure to light. Do not freeze. The antibody was conjugated with BD Horizon™ V500 under optimum conditions, and unreacted BD Horizon™ V500 was removed.
詳細を表示 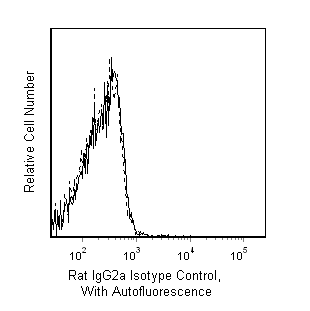 The antibody is conjugated to BD Horizon™ V500, which has been developed for use in multicolor flow cytometry experiments and is

available exclusively from BD Biosciences. It is excited by the Violet laser with an Ex max of 415 nm and Em Max at 500 nm. BD Horizon V500 conjugates emit at a similar wavelength to Amcyan yet exhibit reduced spillover into the FITC channel. For more information on BD Horizon V500, visit bdbiosciences.com/colors.

When compensating dyes in this spectral range (such as Horizon™ V500 and AmCyan), the most accurate compensation can be obtained using single stained cellular controls.  Due to spectral differences between cells and beads  in this channel, using BD CompBeads can result in spillover errors for V500 and AmCyan reagents.   Therefore, the use of BD CompBeads or BD CompBeads Plus to determine spillover values for these reagents is not recommended.   Different V500 reagents (e.g. CD4 vs. CD45) can have slightly different fluorescence spillover therefore, it may also be necessary to use clone specific compensation controls when using these reagents.

V500
BD Horizon™ V500 Dye is part of the BD Horizon™ Violet family of dyes. This is a small organic fluorochrome with an excitation maximum (Ex Max) at 415-nm and an emission maximum (Em Max) at 499-nm. Driven by BD innovation, V500 is designed to be excited by the violet laser (405-nm) and detected using an optical filter centered near 500 nm (eg, a 525/50 nm bandpass filter). Please ensure that your instrument’s configurations (lasers and optical filters) are appropriate for this dye.
V500
Violet 405 nm
415 nm
499 nm
561226 Rev.1
引用＆参考文献