Immunophenotyping studies of chemokine receptors need to be performed on freshly collected whole blood (<24 Hrs). Incubation with the antibody should be done at room temperature in the dark. Cellular manipulation, such as Ficoll™ separation, freezing, or exposure to cold temperatures prior to staining have been shown to cause a decrease in staining intensity and inconsistent results. 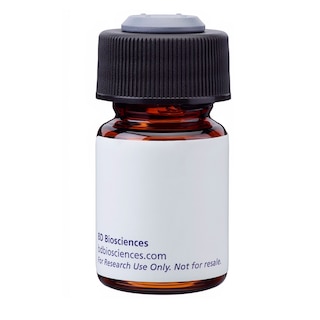 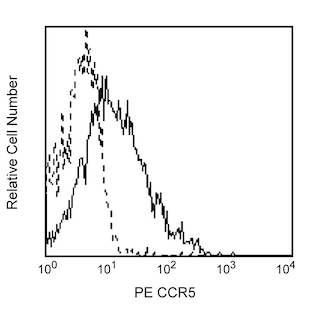 The 3A9 monoclonal antibody recognizes CD195, which is also known as the chemokine receptor, CCR5, a seven transmembrane-spanning G protein-associated molecule. The 3A9 antibody also reportedly cross-reacts with human CCR8. Results of epitope mapping and sequence comparison between CCR5 and CCR8 reveals that the first three amino acid residues for these two receptors are identical: MDY (Met-Asp-Tyr). CCR5 belongs to the β-chemokine receptor family. It is expressed on subsets of T lymphocytes, NK cells, monocytes, macrophages, and dendritic cells. CCR5 regulates lymphocyte chemotaxis activation and transendothelial migration during inflammation. It signals a response to at least three chemokines: RANTES and macrophage inflammatory protein-1 (MIP-1) α and β. Additionally, CCR5 has been found to be a co-receptor for macrophage-tropic HIV-1 on CD4+ cells, a characteristic that is important in viral transmission. Reports indicate that individuals who have partial (heterozygous) or complete (homozygous) deletion of the CCR5 allele, demonstrate resistance to HIV infection. CCR5 has been clustered as CD195 in the VIIth HLDA workshop.

PE
R-Phycoerythrin (PE), is part of the BD family of Phycobiliprotein dyes. This fluorochrome is a multimeric fluorescent phycobiliprotein with excitation maximum (Ex Max) of 496 nm and 566 nm and an emission maximum (Em Max) at 576 nm. PE is designed to be excited by the Blue (488 nm), Green (532 nm) and Yellow-Green (561 nm) lasers and detected using an optical filter centered near 575 nm (e.g., a 575/26-nm bandpass filter). As PE is excited by multiple lasers, this can result in cross-laser excitation and fluorescence spillover on instruments with various combinations of Blue, Green, and Yellow-Green lasers. Please ensure that your instrument’s configurations (lasers and optical filters) are appropriate for this dye.
PE
Yellow-Green 488 nm, 532 nm, 561 nm
496 nm, 566 nm
576 nm
引用＆参考文献