Western blot analysis of cyclin C in NIH 3T3 mouse fibroblasts. The polyclonal antibodies (Cat. No. 558903) was titrated from 1:4000 to 1:12,000 (lanes 1 to 3) and identifies cyclin at ~ 36 kD. The identity of the higher molecular weight band (~ 45 kD) has not been determined, but may represent an alternative splice product of the cyclin C gene.

The polyclonal antibody was purified from antiserum by negative adsorption and affinity chromatography. Store undiluted at 4°C.
显示较多信息

The antibodies may be used for western blot analysis (1:1000) and immunoprecipitation (1:100). Cyclin C has a molecular weight of 36 kD; however a 45 kD protein may also be observed in some cell types using the antiserum. The identity of this protein has not been determined, but may represent an alternative splice product of the cyclin C gene, as has been identified in other species. HeLa human cervical carcinoma (ATCC CCL 2) and NIH 3T3 mouse fibroblasts (ATCC CRL 1658) are suggested as a positive controls for these applications. 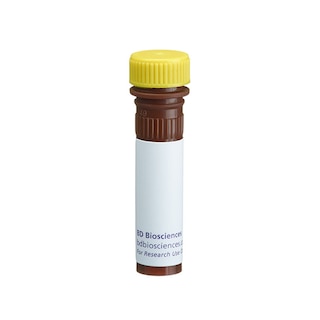 Cyclins and cyclin-dependent kinases (cdks) are evolutionarily conserved proteins that are essential for cell-cycle control in eukaryotes. Cyclins contain a conserved amino acid sequence motif, the cyclin box, which allows their binding to cdks to form active complexes that regulate progression of the cell cycle. More recently, cyclins are being shown to have additional functions not restricted to cell cycle regulation. Thus, cyclins have been placed into functional groups as follows: Group 1 cyclins (A, B, D1, D2, D3, E and F) function primarily in cell cycle reguation; Group 2 cyclins (C and H) also play a role in transcriptional regulation; Group 3 cyclins (G1, G2 and I) may play a role distinct from either cell cycle or transcriptional regulation. Cyclin C has been identified in both human and chicken species. Like many cyclins, the expression of cyclin C oscillates throughout the cell cycle, with a peak observed during G1 phase. Cyclin C may play a dual role within the cell in its ability to regulate both cell cycle progression as well as gene transcription. Cyclin C associates with Cdk8, forming a complex which can induce gene transcription of Cdc2 (Cdk1). Because Cdc2 kinase is important for cell entry into mitosis, cyclin C's ability to regulate cell cycle progression may be attributed, in part, to modulation of Cdc2 protein expression.6 Cyclin C has a predicted molecular weight of 36 kD. The polyclonal antiserum reacts with human and mouse cyclin C. A polypeptide fragment containing amino acids 290-303 (QGPNGSQNSSYSQS) at the C-terminus of human cyclin C, with the addition of a C-terminal cysteine (C) residue to facilitate conjugation to KLH, was used as immunogen.