Applications include immunoprecipitation at 1-2 µg/one million cells. Rb migrates as multiple, closely-spaced bands between approximately 110-116 kDa when sized on denaturing polyacrylamide gels (i.e. by SDS/PAGE). The multiple bands represent different Rb phosphorylation states, the higher molecular weight bands are more highly phosphorylated than the lower molecular weight bands. The level of phosphorylation is cell cycle dependent, and may also be cell type dependent (not all forms are seen in all cell types that express Rb). Gel conditions influence the actual number of bands observed. In cases where optimal band separation is desired, use a 7 to 10% non-gradient long (at least 12 inches) gel. MOLT-4 human leukemia cells (ATCC CRL-1582) are suggested as a positive control. 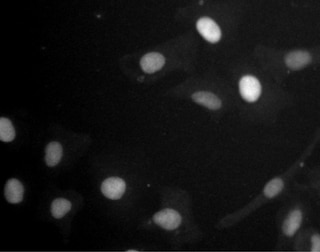 The retinoblastoma gene encodes a nuclear phosphoprotein (Rb or p110Rb) which is expressed in most normal cells of vertebrates and acts as a tumor suppressor gene product. An underphosphorylated form of Rb is mainly found in resting or fully differentiated cells, whereas the hyperphosphorylated form is present in proliferating cells. Only the underphosphorylated form of Rb binds specifically to viral oncogenes such as SV40 large T, adenoviral EIA and HPV-E7. This interaction may partially contribute to the transforming activity of these viral oncoproteins. Rb also interacts with several cyclins including A, D, and E as well as the transcriptional activator E2F. The importance of these interactions for the biological function of Rb is still being elucidated. G99-549 recognizes only the fast migrating, underphosphorylated form of Rb protein. G99-549 cross-reacts with mouse underphosphorylated Rb. The epitope has been mapped to amino acids 514-610 (box A) of human Rb. Recombinant full-length human Rb was produced in the baculovirus expression vector system (BEVS), purified and used as immunogen.

Purified
Tissue culture supernatant is purified by either protein A/G or affinity purification methods. Both methods yield antibody in solution that is free of most other soluble proteins, lipids, etc. This format provides pure antibody that is suitable for a number of downstream applications including: secondary labeling for flow cytometry or microscopy, ELISA, Western blot, etc.
Purified
554164 Rev.10
Citations & References