B cells pass through a number of developmental stages both before and after exposure to antigens. As they mature and differentiate, they give rise to multiple functionally distinct subsets.

Differential expression of cell surface and intracellular markers, as well as their distinct immunoglobulin and cytokine secretion profiles, provide valuable clues to the diverse nature and function of the different B-cell subsets.

For example, the expression of syndecan-1 (CD138) distinguishes circulating plasmablasts and plasma cells, the “professional” antibody-secreting B cells, from other developmental and functional subsets.

To support the use of multicolor flow cytometry for the study of B cells, BD offers a wide portfolio of reagents for B-cell phenotyping. They are available in multiple formats, to provide maximum flexibility in panel design. We continue to add new specificities as new markers emerge.

The schematic summarizes the main developmental and differentiation stages, as well as some of the key markers associated with each B-cell subset in mouse and human.

B cells originate from hematopoietic stem cells (HSCs) located in bone marrow, where they pass through the first stages of development. The still immature B cells then migrate to secondary lymphoid tissues, where most of them continue their development into mature follicular B cells.1 When the B-cell receptor (BCR) complex of a mature B cell, consisting of the membrane-bound (m) forms of IgM and IgD, binds its cognate foreign antigen, the cell becomes activated and differentiates into an antibody-secreting plasma cell.2

B cells also follow alternative differentiation pathways from those of conventional B cells, resulting in subsets that have distinct functions and marker expression patterns. For example, marginal-zone (MZ) B cells function as innatelike cells. Unlike conventional B cells, they can be activated through Toll-like receptor (TLR)-ligation, bypassing the BCR. They also tend to express CD1d and CD21, but not CD23.1,2 B-cell subsets with regulatory function have been identified and are distinguished by their ability to secrete IL-10 or TGF-β-1.1–4

With a comprehensive selection of antibodies to mouse and human markers, BD can support a wide variety of phenotyping panels for the study of B cells across all developmental stages.

To illustrate the use of differential marker expression for B-cell analysis, seven cell surface markers were used to analyze B-cell subsets in mouse bone marrow, allowing discrimination of seven different developmental phases in this tissue. 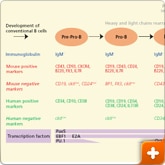 Summary of the key developmental stages and markers of B cells

Summary of the key developmental stages and markers of B cells

This schematic is not intended to be comprehensive, and markers can be altered as a result of cellular environment, differentiation state, and other factors. 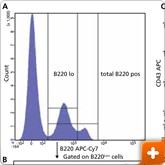 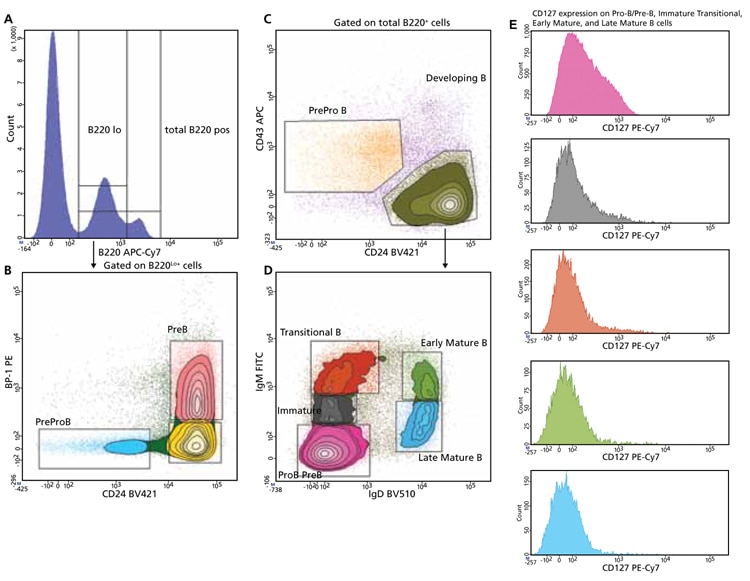