Immunofluorescent Staining and Flow Cytometry: The 1048 antibody is useful for flow cytometric analysis of CD21/CR2 expressed on cell surfaces. Double staining PBMCs with clone 1048 and BD Biosciences Pharmingen's other CD21 specific clone, B-ly4 (Cat. No. 559867) reveal up to 98% identity of the positive population, indicating that these two clones recognize different epitopes of CR2 (data not shown). 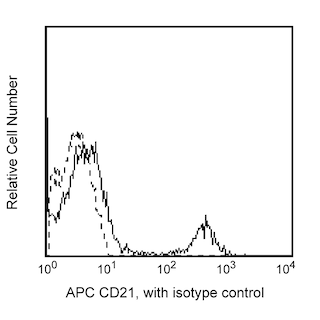 CD21 is a 145 kDa transmembrane glycoprotein that is expressed on mature B cells, follicular dendritic cells, a subset of immature thymocytes and on some epithelial cells. CD21 is also known as the C3d Receptor, Complement Receptor 2 (CR2), and the Epstein-Barr Virus receptor, (EBV-R). CD21 is part of a large signal-transduction complex that also includes CD19, CD81 and Leu13. CR2 serves as a receptor for the activation fragments of complement component C3, i.e. C3d, iC3d, and C3dg and C3d-bound antigens and plays a central role in the immune response by amplifying B-cell activation and proliferation. CR2 is also the receptor for EBV by binding its surface glycoprotein gp350/220. Anti-human CR2 hybridomas were generated from Cr2-/-mice (lacking the cr2 gene, that encodes CR2 and CR1 in mice) immunized with the recombinant protein representing the first two amino-terminal short consensus repeats (SRC) of human CR2, SCR1-2. Both the C3d and EBV binding sites of hu CR2 were localized to these sites. Clone 1048 has been reported to specifically react with CR2-expressing cells and to inhibit CR2 interactions with C3 fragments or the EBV surface protein, gp350/220.

Purified
Tissue culture supernatant is purified by either protein A/G or affinity purification methods. Both methods yield antibody in solution that is free of most other soluble proteins, lipids, etc. This format provides pure antibody that is suitable for a number of downstream applications including: secondary labeling for flow cytometry or microscopy, ELISA, Western blot, etc.
Purified
552727 Rev.2
Citations & References