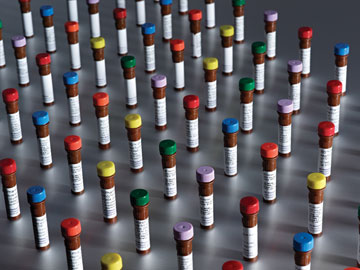 The BD Horizon Brilliant™ unique polymer dyes were developed from pioneering polymer dye technology acquired from Sirigen Ltd. These unique dyes are brighter than conventional dyes, with equivalent background—a breakthrough in the field.

For reagent selection in general, "bright is better." For cells that have few receptors on the surface, bright reagents are essential in resolving these dim cells from others in a sample. The characteristics of the BD Horizon Brilliant polymer dyes enable them to achieve much brighter fluorescence signals than traditional organic fluorescent dyes or even phycobiliproteins such as PE or APC. This means that they are effective for identifying cell populations with a broader range of receptor density than previously possible.

In 2000, the Nobel Prize in Chemistry was awarded for the discovery of a unique class of conducting polymer materials which are revolutionizing the electronic and display industries. BD Horizon Brilliant polymer dyes are based on these patented chemistries, which allow the creation of very photostable polymer dyes that are effective at collecting excitation light and efficiently converting it to emitted light at a longer wavelength.

These superior polymer reporters can then be attached to nucleic acid probes and antibodies for use in a variety of assays and applications. They can dramatically increase detection signals (up to 100 times) for sensitivity well beyond existing methods and reagents.

BD Horizon Brilliant polymer chains can be considered as a collection of optical segments. Each segment in the polymer chain is capable of absorbing light, resulting in materials that can have extremely large extinction coefficients (or probability of absorbing photons of light).

As a result of the electronic delocalization inherent to these materials, energy has the ability to move or migrate along these extended chains. Thus, all the light "harvested" by the polymers can either be channeled to a closely associated fluorescent acceptor of lower energy through a fluorescence resonance energy transfer (FRET) process, or emitted as fluorescence by the polymer itself if no dyes are used. It is this collective "molecular antenna"–like behavior that forms the foundation of the technology and intellectual property base. 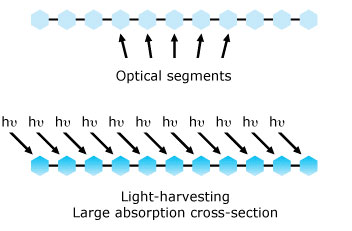 Light harvesting base polymers have multiple optical segments that can emit for fluorescence detection. 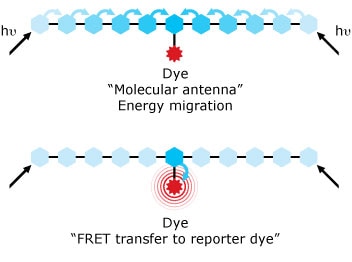 Conjugated to a reporter dye, these polymers can also serve as donors to create tandem dyes with exceptional Stokes shifts.

The base polymer dyes are the simplest embodiment of the technology, are very photostable, and are bright compared to conventional fluorescent dyes. They are very effective at collecting excitation light (like molecular antennae) and efficiently converting it to emitted light at a longer wavelength.

One of the future goals for this technology is to design base polymer dyes and polymer tandem dyes that can be easily multiplexed to make multicolor flow cytometry easier.