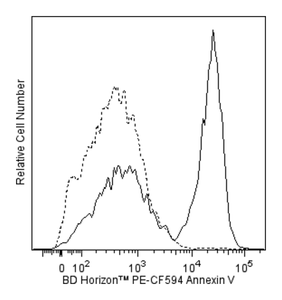 Apoptosis is a normal physiologic process that occurs during embryonic development as well as in maintenance of tissue homeostasis. The apoptotic program is characterized by certain morphologic features, including loss of plasma membrane asymmetry and attachment, condensation of the cytoplasm and nucleus, and internucleosomal cleavage of DNA. Loss of plasma membrane asymmetry is one of the earliest features. In apoptotic cells, the membrane phospholipid phosphatidylserine (PS) is translocated from the inner to the outer leaflet of the plasma membrane, thereby exposing PS to the external cellular environment. Annexin V is a 35-36 kDa Ca2+ dependent phospholipid-binding protein that has a high affinity for PS, and binds to cells with exposed PS. Annexin V may be conjugated to fluorochromes including BD Horizon™ PE-CF594. This format retains its high affinity for PS and thus serves as a sensitive probe for flow cytometric analysis of cells that are undergoing apoptosis. Since externalization of PS occurs in the earlier stages of apoptosis, PE-CF594 Annexin V staining can identify cells undergoing apoptosis at an earlier stage rather than assays based on nuclear changes such as DNA fragmentation.

The Annexin V is conjugated to BD Horizon PE-CF594 that has been developed for use in multicolor flow cytometry experiments and is available exclusively from BD Biosciences. Annexin is conjugated to BD Horizon PE-CF594, which has been developed exclusively by BD Biosciences as a better alternative to PE-Texas Red®. PE-CF594 excites and emits at similar wavelengths to PE-Texas Red® yet exhibits improved brightness and spectral characteristics. Due to PE having maximal absorption peaks at 496 nm and 564 nm, PE-CF594 can be excited by the blue (488-nm), green (532-nm) and yellow-green (561-nm) lasers and can be detected with the same filter set as PE-Texas Red® (eg, 610/20-nm filter).

When compensating dyes in this spectral range, the most accurate compensation can be obtained using unstained and single color-stained cellular controls.

The following protocol is provided as an illustration on how PE-CF594 Annexin V may be used on a cell line (Jurkat).

2. 7-Amino-Actinomycin D (7-AAD): Not included. 7-AAD (Cat. No. 559925) is a convenient, ready-to-use nucleic acid dye with fluorescence detectable in the far red range of the spectrum. Use 5 µl per test.

1. Wash cells twice with cold PBS and then resuspend cells in 1× Binding Buffer at a concentration of 1 × 10^6 cells/ml.

5. Add 400 µl of 1× Annexin V Binding Buffer to each tube. Analyze by flow cytometry within 1 hr.