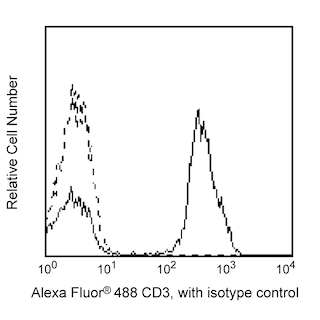 The 2A9-1 monoclonal antibody specifically binds to human CX3CR1, which is also known as chemokine (C-C) receptor-like 1 (CCRL1), Beta chemokine receptor-like 1 (CMK-BRL-1), G protein-coupled receptor 13 (GPR13), or GPRV28 (V28). CX3CR1 is a seven transmembrane G protein coupled receptor that is expressed by NK cells, T cells, and monocytes. The cellular expression of CX3CR1 is correlated with high levels of intracellular perforin and granzyme B. CX3CR1 serves as a receptor for fractalkine (CX3CL1). Fractalkine is a transmembrane chemokine of the CX3C family that is expressed on activated endothelial cells, neurons, and astrocytes. Interaction of CX3CR1 with fractalkine initiates cellular adhesive and chemotactic responses.

PE
R-Phycoerythrin (PE), is part of the BD family of Phycobiliprotein dyes. This fluorochrome is a multimeric fluorescent phycobiliprotein with excitation maximum (Ex Max) of 496 nm and 566 nm and an emission maximum (Em Max) at 576 nm. PE is designed to be excited by the Blue (488 nm), Green (532 nm) and Yellow-Green (561 nm) lasers and detected using an optical filter centered near 575 nm (e.g., a 575/26-nm bandpass filter). As PE is excited by multiple lasers, this can result in cross-laser excitation and fluorescence spillover on instruments with various combinations of Blue, Green, and Yellow-Green lasers. Please ensure that your instrument’s configurations (lasers and optical filters) are appropriate for this dye.
PE
Yellow-Green 488 nm, 532 nm, 561 nm
496 nm, 566 nm
576 nm
565798 Rev.1
Citations & References