Immunohistochemistry: The MLH-1 antibody is recommended to test for immunohistochemical staining of frozen sections and formalin-fixed paraffin embedded sections. Tissues tested were human tonsil, colon carcinoma and intestine. For paraffin sections microwave oven pretreatment with BD Retrievagen A (pH 6.5) (Cat. No. 550524) is required. The staining seen is usually nuclear although some staining may be observed in the cytoplasm. The isotype control recommended for use with this antibody is purified mouse IgG1 (Cat. No. 550878). For optimal indirect immunohistochemical staining, MLH-1 antibody should be titrated (1:10 to 1:50 dilution) and visualized via a three-step staining procedure in combination with polyclonal, biotin conjugated anti-mouse Igs (multiple adsorbed) (Cat. No. 550337) as the secondary antibody and Streptavidin-HRP (Cat.No. 550946) together with the DAB detection system (Cat. No. 550880). Alternatively, the Anti-mouse Ig HRP Detection Kit (Cat. No. 551011) contains all the detection reagents required. 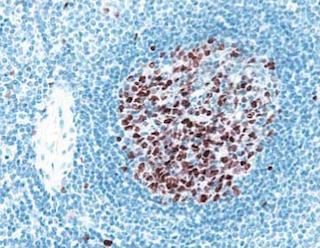 The repair of mismatched DNA is essential to maintaining the integrity of genetic information over time. In bacteria the DNA repair process is accomplished by the MutL, MutH, and MutS proteins. The MutS protein initially recognizes and binds to mismatched DNA. Following this, MutH, an endonuclease, and MutL form a complex with MutS and carry out an excision repair mechanism. When bacteria are deficient in one of these enzymes a mutator phenotype arises characterized by genetic instability. The important role played by DNA repair enzymes is emphasized by the fact that they are highly conserved from bacteria to yeast to mammals. In yeast the proteins are called MutS homolog 2 (MSH2), MutL homolog (MLH1), and PMS1 which is also a homolog of MutL. MSH2 is involved in the initial recognition of mismatched nucleotides during the replication mismatch repair process. It is thought that after MSH2 binds to a mismatched DNA duplex it is joined by a heterodimer of MLH1 and PMS1 which together help facilitate the later steps in mismatch repair. Biochemical studies of the human homologs of DNA mismatch repair enzymes MLH1, PMS2, and MSH2 indicate that human MSH2 protein can bind mispaired DNA, and that human MLH1 and PMS2 can exist as a heterodimer. These and other studies support the conservation of eukaryotic DNA mismatch repair mechanisms. The G168-15 antibody recognizes human MLH1 (80-85 kDa). Full-length human recombinant MLH was expressed as a fusion protein, affinity purified, and used as immunogen.

Purified
Tissue culture supernatant is purified by either protein A/G or affinity purification methods. Both methods yield antibody in solution that is free of most other soluble proteins, lipids, etc. This format provides pure antibody that is suitable for a number of downstream applications including: secondary labeling for flow cytometry or microscopy, ELISA, Western blot, etc.
Purified
550838 Rev.2
Citations & References