Store undiluted at 4°C and protected from prolonged exposure to light. Do not freeze. The antibody was conjugated with BD Horizon™ PE-CF594 under optimum conditions, and unconjugated antibody and free PE-CF594 were removed. The monoclonal antibody was purified from tissue culture supernatant or ascites by affinity chromatography.
Show More 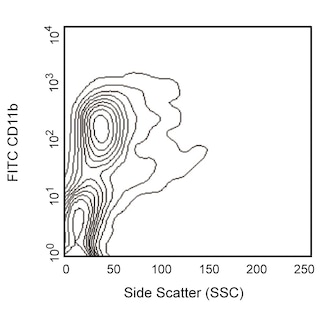 The E50-2440 monoclonal antibody specifically recognizes Siglec-F. Siglecs are the sialic acid-binding immunoglobulin superfamily lectins defined in the human, each of which has a distinctive expression pattern in the hematopoietic system and at least some of which are known to mediate cell-cell interactions. Orthologous proteins of human Siglec-1 (Sialoadhesin or CD169), Siglec-2 (CD22), and Siglec-4 (myelin-associated glycoprotein) have been characterized in the mouse. Human Siglec-3 (CD33) and Siglecs-5 through -10 are encoded by a cluster of closely related genes, and each has two cytoplasmic ITIM (Immunoreceptor Tyrosine-based Inhibitory Motifs). Similarly, mouse Siglec-F is encoded by the Siglecf gene in a syntenic cluster in the mouse, and the protein has sialic acid-binding activity and an intracytoplasmic ITIM. Its expression pattern differs from those of the human Siglec-3-related proteins in that it is found on immature cells of the myelomonocytic lineage, with reduced expression on mature neutrophils and monocytes, and not on lymphoid cells. It has been proposed that mAb E50-2440 may be used for identification of immature myelomonocytic cells in the mouse.