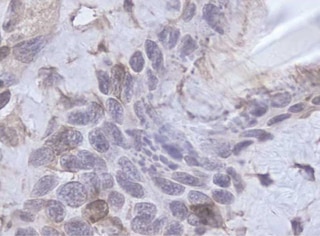 The Avas 12α1 monoclonal antibody specifically binds to fetal liver kinase 1 (Flk-1) which is also known as CD309. Flk-1 is a receptor protein tyrosine kinase which is closely related to CD117 (c-kit) and CD140a (PDGF Receptor α chain) of the immunoglobulin superfamily. Flk-1, also known as VEGF Receptor-2 (VEGF-R2 or VEGFR2), is a receptor for vascular endothelial growth factor (VEGF). It is expressed, at the mRNA and protein levels, on distinct sets of mesoderm during gastrulation and on endothelial cells in embryonic and adult tissues. In vivo and in vitro studies indicate that Flk-1 is required for the embryonic development of vascular endothelial and hematopoietic cells.

Purified
Tissue culture supernatant is purified by either protein A/G or affinity purification methods. Both methods yield antibody in solution that is free of most other soluble proteins, lipids, etc. This format provides pure antibody that is suitable for a number of downstream applications including: secondary labeling for flow cytometry or microscopy, ELISA, Western blot, etc.
Purified
555307 Rev.6
Citations & References