Two-color analysis of the expression of CD73 on splenic T and B lymphocytes. C57BL/6 splenocytes were stained with either PE-conjugated isotype control mAb R35-95 (Cat. No. 553930, left panel) or PE-conjugated mAb TY/23 (middle and right panels). T or B lymphocytes were identified by staining with FITC-conjugated anti-mouse CD3e mAb 145-2C11 (Cat. No. 553061/553062, left and middle panels) or FITC-conjugated anti-mouse CD19 mAb 1D3 (Cat. No. 557398/553785, right panel), respectively. Flow cytometry was performed on a BD FACSCalibur™ flow cytometry system. 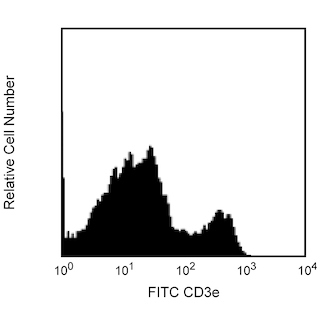 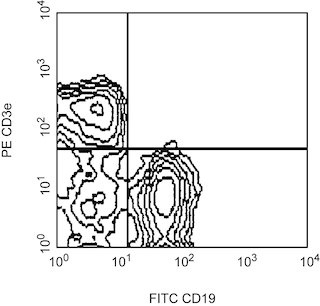 The TY/23 monoclonal antibody specifically binds to CD73 or Ecto-5'-nucleotidase (5'-NT), a 69 kDa GPI-anchored cell-surface protein with enzymatic and signal transduction activities. 5'-NT catalyzes the dephosphorylation of extracellular nucleoside 5' monophosphates into a form which can enter cells to meet their metabolic needs. It also regulates the concentration of extracellular adenosine, which initiates a variety of physiological responses through the adenosine receptors in many tissues. CD73 expression appears to be developmentally regulated on leukocytes. In the bone marrow, it is found on most CD11b+ myeloid cells and very few CD19+ cells of the B-lymphocyte lineage. It is not found on CD11b+ cells in the periphery nor on marrow-derived GMCSF-stimulated dendritic cells. Some peripheral B lymphocytes express CD73, with higher levels on isotype-switched B cells. The few thymocytes which have detectable surface CD73 are of the CD4-CD8- (double negative) and the single-positive populations. In the peripheral lymphoid organs, significant subpopulations of the CD4+ and CD8+ T lymphocytes express CD73, with variation in the percentages of CD73-bearing T cells observed among inbred mouse strains. In the thymus and peripheral lymphoid organs, CD73 is found on endothelia and stromal cells. CD73 has also been detected on bone marrow and thymic epithelial cell lines, kidney glomeruli and proximal-tubule epithelial cells, and liver endothelial cells and hepatocytes. The TY/23 mAb inhibits the enzymatic activity of CD73. Although soluble TY/23 mAb by itself does not affect T lymphocyte proliferation, it is an effective co-stimulator with PMA, but not with Concanavalin-A or plate-bound anti-CD3ε mAb 145-2C11.

PE
R-Phycoerythrin (PE), is part of the BD family of Phycobiliprotein dyes. This fluorochrome is a multimeric fluorescent phycobiliprotein with excitation maximum (Ex Max) of 496 nm and 566 nm and an emission maximum (Em Max) at 576 nm. PE is designed to be excited by the Blue (488 nm), Green (532 nm) and Yellow-Green (561 nm) lasers and detected using an optical filter centered near 575 nm (e.g., a 575/26-nm bandpass filter). As PE is excited by multiple lasers, this can result in cross-laser excitation and fluorescence spillover on instruments with various combinations of Blue, Green, and Yellow-Green lasers. Please ensure that your instrument’s configurations (lasers and optical filters) are appropriate for this dye.
PE
Yellow-Green 488 nm, 532 nm, 561 nm
496 nm, 566 nm
576 nm
550741 Rev.4
Citations & References