Store undiluted at 4°C and protected from prolonged exposure to light. Do not freeze. The monoclonal antibody was purified from tissue culture supernatant or ascites by affinity chromatography. The antibody was conjugated with BD Horizon BV711 under optimal conditions that minimize unconjugated dye and antibody.
Show More 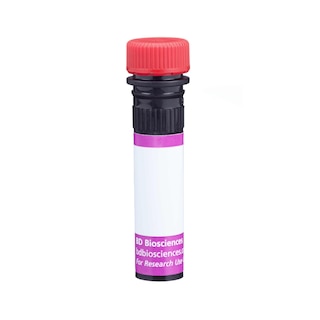 The antibody was conjugated to BD Horizon™ BV711 which is part of the BD Horizon Brilliant™ Violet family of dyes. This dye is a tandem fluorochrome of BD Horizon BV421 with an Ex Max of 405-nm and an acceptor dye with an Em Max at 711-nm.  BD Horizon BV711 can be excited by the violet laser and detected in a filter used to detect Cy™5.5 / Alexa Fluor® 700-like dyes (eg, 712/20-nm filter).  Due to the excitation and emission characteristics of the acceptor dye, there may be moderate spillover into the Alexa Fluor® 700 and PerCP-Cy5.5 detectors.  However, the spillover can be corrected through compensation as with any other dye combination.

BV711
The BD Horizon Brilliant Violet™ 711 (BV711) Dye is part of the BD Horizon Brilliant Violet™ family of dyes. This tandem fluorochrome is comprised of a BV421 donor with an excitation maximum (Ex Max) of 407-nm and an acceptor dye with an emission maximum (Em Max) at 713-nm. BV711, driven by BD innovation, is designed to be excited by the violet laser (405-nm) and detected using an optical filter centered near 710-nm (e.g., a 712/20-nm bandpass filter). The acceptor dye can be excited by the Red (628–640-nm) laser resulting in cross-laser excitation and fluorescence spillover. Please ensure that your instrument’s configurations (lasers and optical filters) are appropriate for this dye.
BV711
Violet 405 nm
407 nm
713 nm
740761 Rev.1
Citations & References