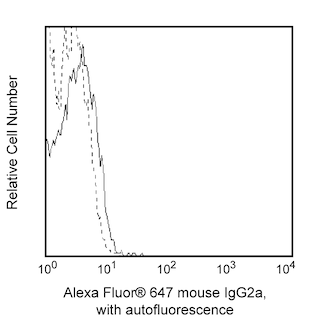 Neurite adhesion molecule L1 has been implicated in neuron-neuron and neuron-Schwann cell adhesion in vertebrates. L1-like molecules, found in mouse, rat, chicken, and human, promote axonal elongation and may also play a role in regeneration of axons after injury. Molecular cloning data suggest 87% amino acid identity between mouse and human L1 molecules. 5G3 antigen (Ag), originally defined by monoclonal antibody 5G3, is considered to be the human homologue of mouse L1. The 5G3 antibody was developed against a human neuroblastoma cell line to use as a probe for the elucidating the biological characteristics of neuroblastoma. 5G3 specifically recognizes a neuroblastoma target glycoprotein antigen of 215 kDa and its 200 kDa precursor. The 215 kDa molecule is expressed on the cell surface; whereas the 200 kDa precursor is shed from the cell surface. The 215 and 200 kDa species also differ in their posttranslational modification patterns. The 5G3 antibody has been used as a marker for neuroblastoma, and to purify 5G3 Ag from normal adult human brain.

The molecular masses observed using mAb 5G3 may vary among immunoprecipitation isolates. In normal human cerebellum, 5G3 Ag migrated as a 190/200 kDa doublet, 140 kDa band with minor bands at 80 and 65 kDa. 5G3 Ag isolated from SK-N-AS cells migrates as 200 to 215 kDa bands, or as a diffuse band ranging from 200 to 215 kDa. Additional bands have been described at 140 to 150 kDa in SK-N-AS cells. Only the 200 kDa band has been detected in culture media from SK-N-AS cells.