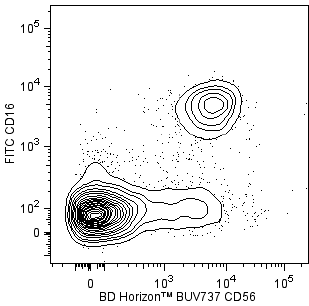 The 2A9-1 monoclonal antibody specifically binds to human CX3CR1, which is also known as chemokine (C-C) receptor-like 1 (CCRL1), Beta chemokine receptor-like 1 (CMK-BRL-1), G protein-coupled receptor 13 (GPR13), or GPRV28 (V28). CX3CR1 is a seven transmembrane G protein coupled receptor that is expressed by NK cells, T cells, and monocytes. The cellular expression of CX3CR1 is correlated with high levels of intracellular perforin and granzyme B. CX3CR1 serves as a receptor for fractalkine (CX3CL1). Fractalkine is a transmembrane chemokine of the CX3C family that is expressed on activated endothelial cells, neurons, and astrocytes. Interaction of CX3CR1 with fractalkine initiates cellular adhesive and chemotactic responses.