Western blot analysis of PARP cleavage. Jurkat cells (Human T-cell leukemia; ATCC TIB-152) were induced to undergo CD95 (Fas) mediated apoptosis by treatment with mouse anti-human CD95 antibody (clone DX2) (MN 555670) and Protein G for 4 hr (lane 2) or were untreated (lane 1). Lysates were probed with the purified mouse anti-PARP antibody (clone C2-10) at a dilution of 1:2000. The 116 kDa intact form of PARP is observed in both the untreated and anti-CD95 treated cell lysates. However, the 89 kDa PARP cleavage fragment is seen only in the treated cell lysates.

This antibody is prepared as an ascites solution.  For western blot analysis, investigators are highly encouraged to titrate the antibody for optimal performance.  A titration range between 1:2000 to 1:4000 is suggested. 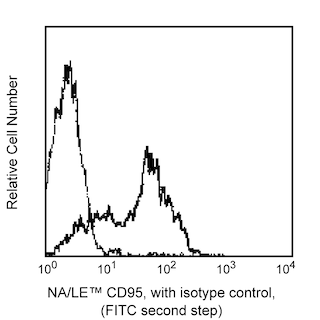 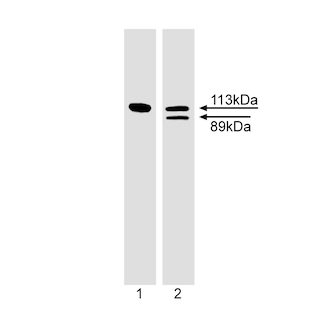 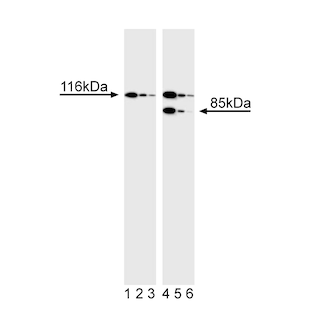 PARP [Poly(ADP-Ribose) Polymerase] is a 113 kDa nuclear chromatin associated enzyme that catalyzes the transfer of ADP-ribose units from NAD+ to a variety of nuclear proteins including topoisomerases, histones, and PARP itself. The catalytic activity of PARP is increased in nonapoptotic cells following DNA damage, and PARP is thought to play an important role in mediating the normal cellular reponse to DNA damage and is a target of the caspase protease activity associated with apoptosis. During apoptosis, PARP is cleaved from a 113 kDa intact form into 89 kDa and 24 kDa fragments. This process separates the amino-terminal DNA-binding domain of the enzyme from the C-terminal catalytic domain resulting in the loss of normal PARP function. Although the role of PARP in apoptosis remains to be elucidated, PARP cleavage is considered to be a marker of apoptosis.  This antibody has been reported to recognize an epitope located within the DNA-binding domain of the enzyme.