V450 Annexin V is a sensitive probe for identifying apoptotic cells, binding to negatively charged phospholipid surfaces (Kd of ~5 x 10^-2) with a higher affinity for phosphatidylserine (PS) than most other phospholipids. V450 Annexin V binding is calcium-dependent and defined calcium and salt concentrations are required for optimal staining as described in the V450 Annexin V Staining Protocol.  Investigators should note that V450 Annexin V flow cytometric analysis on adherent cell types (e.g HeLa, NIH 3T3, etc.) is not routinely tested as specific membrane damage may occur during cell detachment or harvesting. Methods for utilizing Annexin V for flow cytometry on adherent cell types, however, have been previously reported (Casiola-Rosen et al. and van Engelend et al.).

V450 Annexin V is used to quantitatively determine the percentage of cells within a population that are actively undergoing apoptosis. It relies on the property of cells to lose membrane asymmetry in the early phases of apoptosis.  Annexin V is a calcium-dependent phospholipid-binding protein that has a high affinity for PS, and is useful for identifying apoptotic cells with exposed PS. Propidium Iodide (PI) is a standard flow cytometric viability probe and is used to distinguish viable from nonviable cells.

1.  Wash cells twice with cold PBS and then resuspend cells in 1× Binding Buffer at a concentration of 1 × 10^6 cells/ml.

4.  Add 10 µl PI.  The optimal concentration of PI may vary among cell lines where 10 µl of a 50 µg/ml stock is most likely the maximum to be required.  Less may yield optimal results in some experimental systems. 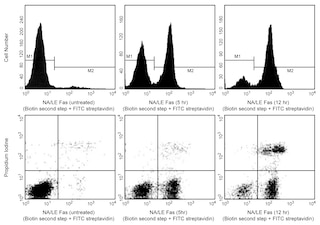 Apoptosis is a normal physiological process that occurs during embryonic development and tissue homeostasis maintenance. The apoptotic program is characterized by certain morphological features, including plasma membrane symmetry and detachment, condensation of the cytoplasm and nucleus, and internucleosomal cleavage of DNA. Loss of the plasma membrane is one of the earliest features of apoptosis. In apoptotic cells, phosphatidylserine (PS), a phospholipid membrane component, is translocated from the inner to the outer leaflet of the plasma membrane, thereby exposing PS to the external cellular environment. Annexin V is a 35-36 kDa Ca2+ dependent phospholipid-binding protein that has a high affinity for PS, and binds to cells with exposed PS. Annexin V may be conjugated to fluorochromes including BD Horizon™ V450. This format retains its high affinity for PS and thus serves as a sensitive probe for flow cytometric analysis of cells that are undergoing apoptosis. Since externalization of PS occurs in the earlier stages of apoptosis, V450 Annexin V staining can identify apoptosis at an earlier stage than assays based on nuclear changes such as DNA fragmentation.

V450
BD Horizon™ V450 Dye is part of the BD Horizon™ violet family of dyes. This is a small organic fluorochrome with an excitation maximum (Ex Max) at 405-nm and an emission maximum (Em Max) at 450-nm. BD Horizon™ V450, driven by BD innovation, is designed to be excited by the violet laser (405 nm) and detected using an optical filter centered near 450-nm (e.g., a 450/50-nm bandpass filter). The dye can be excited by the UV (355-nm) laser resulting in cross-laser excitation and spillover. Please ensure that your instrument’s configurations (lasers and optical filters) are appropriate for this dye.
V450
Violet 405 nm
405 nm
450 nm
560506 Rev.3
Citations & References