The monoclonal antibody was purified from tissue culture supernatant or ascites by affinity chromatography. The antibody was conjugated to APC under optimum conditions, and unconjugated antibody and free APC were removed. Store undiluted at 4°C and protected from prolonged exposure to light. Do not freeze.
Show More 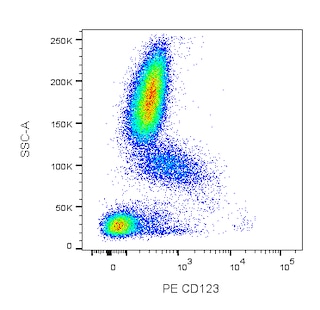 Toll-like receptor 9 (TLR9), also designated as CD289, is a type 1 transmembrane glycoprotein (~110-119 kDa calculated molecular weights for protein isoforms) encoded by the TLR9 gene in chromosome 3. TLR9 is a member of the Toll-like receptor (TLR) family whose members play fundamental roles in pathogen recognition and activation of innate immunity. TLR9 is highly expressed by plasmacytoid dendritic cells and B cells and at lower levels in some other cell types. TLR9 is expressed predominantly in the endoplasmic reticulum. It is recruited to endosomal and lysosomal compartments upon cellular stimulation by bacterial, viral or synthetic DNA molecules that contain unmethylated CpG dinucleotide sequences. TLR9 generated signals lead to the activation of genes that express type-I interferons and proinflammatory cytokines including IL-6 and IL-12. TLR9-mediated signaling is also implicated in acquired immune responses as well as in the pathogenesis of autoimmune diseases. The eB72-1665.1 mAb recognizes the human TLR9 epitope from the peptide sequence, amino acids 273-288.

APC
Allophycocyanin (APC), is part of the BD family of phycobiliprotein dyes. This fluorochrome is a multimeric fluorescent phycobiliprotein with excitation maximum (Ex Max) of 651 nm and an emission maximum (Em Max) at 660 nm. APC is designed to be excited by the Red (627-640 nm) laser and detected using an optical filter centered near 660 nm (e.g., a 660/20 nm bandpass filter). Please ensure that your instrument’s configurations (lasers and optical filters) are appropriate for this dye.
APC
Red 627-640 nm
651 nm
660 nm
560428 Rev.1
Citations & References