Store undiluted at 4°C and protected from prolonged exposure to light. Do not freeze. The monoclonal antibody was purified from tissue culture supernatant or ascites by affinity chromatography. The antibody was conjugated with APC-H7 under optimum conditions, and unconjugated antibody and APC-H7 were removed.
Show More 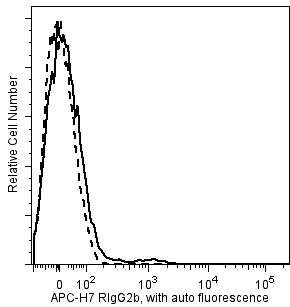 The GK1.5 monoclonal antibody specifically binds to the mouse CD4 (L3T4) differentiation antigen. CD4 is expressed on most thymocytes, a subpopulation of mature T lymphocytes (i.e., MHC class II-restricted T cells, including most T helper cells), and a subset of NK-T cells. In addition, CD4 has also been reported to be detectable on pluripotent hematopoietic stem cells, bone marrow myeloid and B-lymphocyte precursors, intrathymic lymphoid precursors, and a subset of splenic dendritic cells. CD4 has also been reported to be expressed on the plasma membrane of mouse egg cells and is involved in adhesion of the egg to MHC class II-bearing sperm.  CD4 is an antigen coreceptor on the T-cell surface which interacts with MHC class II molecules on antigen-presenting cells. It participates in T-cell activation through its association with the T-cell receptor complex and protein tyrosine kinase lck. The GK1.5 antibody reportedly blocks binding of the RM4-5 and H129.19, but not RM4-4 mouse CD4-specific antibodies.

APC-H7
The BD Horizon™ APC-H7 dye is a part of the BD APC red family of dyes. This tandem fluorochrome is comprised of a Allophycocyanin (APC) donor that has excitation maxima (Ex Max) of 659 nm and an acceptor dye, H7, with an emission maximum (Em Max) at 782 nm. APC-H7, driven by BD innovation, is designed to be excited by the Red (627-640 nm) laser and detected using an optical filter centered near 780 nm (e.g., a 760/60 nm bandpass filter). Please ensure that your instrument’s configurations (lasers and optical filters) are appropriate for this dye.
APC-H7
Red 627-640 nm
659 nm
782 nm
560181 Rev.3
Citations & References