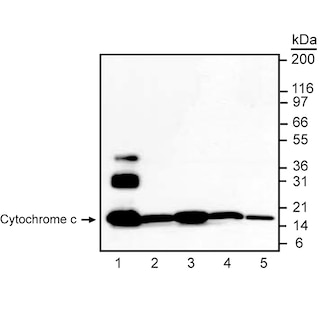 A cytochrome is an electron-transporting protein that contains a heme prosthetic group. Cytochromes have been known to be essential components of the mitochondrial respiratory chain since 1925. The iron atom of the heme group in cytochromes alternates between a reduced ferrous (+2) state and an oxidized ferric (+3) state during electron transport in oxidative phosphorylation. Cytochromes are classified into four groups (a, b, c, and d) according to spectrochemical characteristics, and there are five cytochromes between Coenzyme QH2 and O2 in the electron transport chain. Cytochrome c is a water-soluble peripheral membrane protein of the mitochondria and transports electrons from the Coenzyme QH2 - Cytochrome c reductase complex to the Cytochrome c oxidase complex. Recently it has been suggested that Cytochrome c may be required for cells to undergo apoptosis. Mitochondria may be involved in apoptosis by releasing Cytochrome c to the cytosol where it functions in the activation of Caspase 3 (CPP32), an ICE family molecule that has been shown to trigger apoptosis when activated. In the cytoplasm Cytochrome C might exist in polymeric forms, appearing as a 58-60 kDa band by western blot analysis, rather than the monomeric form. Monomeric Cytochrome c migrates at a reduced molecular weight of 15 kDa.

This antibody is routinely tested by western blot analysis. Other applications were tested at BD Biosciences Pharmingen during antibody development only or reported in the literature.

Purified
Tissue culture supernatant is purified by either protein A/G or affinity purification methods. Both methods yield antibody in solution that is free of most other soluble proteins, lipids, etc. This format provides pure antibody that is suitable for a number of downstream applications including: secondary labeling for flow cytometry or microscopy, ELISA, Western blot, etc.
Purified
556433 Rev.7
Citations & References