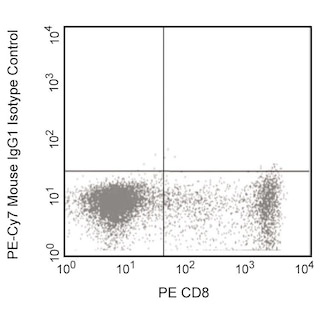 The 1C6/CXCR3 monoclonal antibody specifically binds to human CD183, also known as the CXCR3 chemokine receptor. CD183 is a 40-41 kDa seven-transmembrane protein and member of the G protein-coupled receptor family. CD183 is expressed primarily on activated T cells that infiltrate inflammatory sites. It has also been detected on some circulating T cells, B cells, and NK cells. Reports show that some CXCR3-positive T cells also express CCR5 and are mostly CD45RO-positive cells. Three ligands for CXCR3 have been identified. They are CXCL9 (Mig/monokine induced by interferon-γ), CXCL10 (IP-10/interferon-γ inducible 10-kD protein), and CXCL11 (I-TAC/interferon-inducible T-cell alpha chemoattractant). These chemokines are produced by a variety of cells upon stimulation by IFN-γ and interact with CXCR3 to mediate T-cell chemotaxis. This reagent has been reported to be suitable for immunohistochemical staining of acetone-fixed, frozen sections and/or formalin-fixed, paraffin-embedded tissue sections with citrate pretreatment. Clone 1C6/CXCR3 also cross reacts with a subset of peripheral blood lymphocytes of baboon, and both rhesus and cynomolgus macaque monkeys. The distribution of lymphocytes is similar to that observed with CD183-positive peripheral blood lymphocytes from normal human donors. CXCR3 has been clustered as CD183 in the VIIth HLDA workshop.