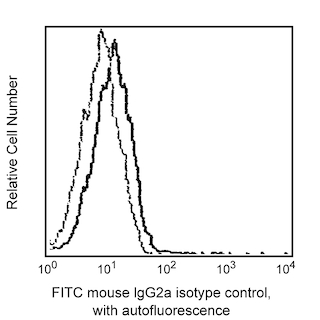 FITC
Fluorescein (FITC) is part of the BD blue family of dyes. This is a small organic fluorochrome with an excitation maximum (Ex Max) at 494-nm and an emission maximum (Em Max) at 518-nm. FITC is designed to be excited by the Blue laser (488-nm) and detected using an optical filter centered near 520 nm (e.g., a 530/30-nm bandpass filter). Please ensure that your instrument’s configurations (lasers and optical filters) are appropriate for this dye.
FITC
Blue 488 nm
494 nm
518 nm
551297 Rev.1
Citations & References