Store undiluted at 4°C and protected from prolonged exposure to light. Do not freeze. The monoclonal antibody was purified from tissue culture supernatant or ascites by affinity chromatography. The antibody was conjugated to the dye under optimum conditions and unreacted dye was removed.
显示较多信息 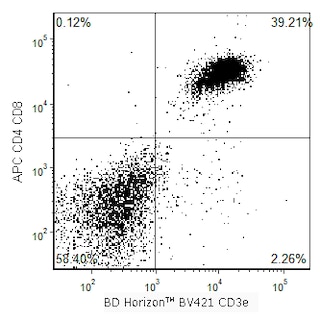 The antibody was conjugated to BD Horizon™ Red 718, which has been developed exclusively by for BD Biosciences as a better alternative to Alexa Fluor™ 700. BD Horizon™ Red 718 can be excited by the red laser (628 – 640 nm) and, with an Em Max around 718 nm, it can be detected using a 730/45 nm filter. Due to similar excitation and emission properties, we do not recommend using R718 in combination with APC-R700 or Alexa Fluor™ 700.