Store undiluted at 4°C and protected from prolonged exposure to light. Do not freeze. The monoclonal antibody was purified from tissue culture supernatant or ascites by affinity chromatography. The antibody was conjugated to APC under optimum conditions, and unconjugated antibody and free APC were removed.
显示较多信息 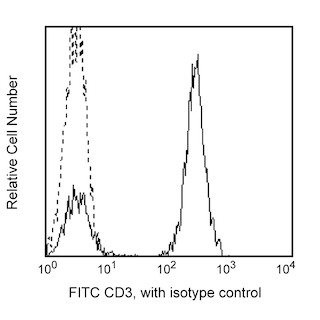 The 1B5 monoclonal antibody specifically binds to CCR10 (CC-chemokine receptor 10). CCR10 is a seven transmembrane domain G-protein-coupled receptor that is also known as GPR-2 (G-protein coupled receptor 2). CCR10 is expressed by cells that mediate epithelial immunity including a small subset of T memory cells, IgA-secreting B cells, dermal endothelial cells and fibroblasts. It is also expressed on EBV-immortalized B cells. Chemokines CCL27  and CCL28 are the ligands for CCR10. CCR10 reportedly not only functions in regulating the homing and function of cells that mediate epithelial immunity. It may also regulate the epithelial localization, survival, and proliferation of tumor cells and facilitate their evasion from immune surveillance.

APC
Allophycocyanin (APC), is part of the BD family of phycobiliprotein dyes. This fluorochrome is a multimeric fluorescent phycobiliprotein with excitation maximum (Ex Max) of 651 nm and an emission maximum (Em Max) at 660 nm. APC is designed to be excited by the Red (627-640 nm) laser and detected using an optical filter centered near 660 nm (e.g., a 660/20 nm bandpass filter). Please ensure that your instrument’s configurations (lasers and optical filters) are appropriate for this dye.
APC
Red 627-640 nm
651 nm
660 nm
564771 Rev.2
报价单和参考