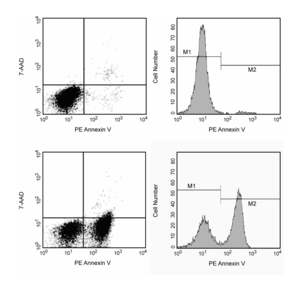 Apoptosis is a normal physiologic process which occurs during embryonic development as well as in maintenence of tissue homeostasis. The apoptotic program is characterized by certain morphologic features, including loss of plasma membrane asymmetry and attachment, condensation of the cytoplasm and nucleus, and internucleosomal cleavage of DNA. Loss of plasma membrane is one of the earliest features. In apoptotic cells, the membrane phospholipid phosphatidylserine (PS) is translocated from the inner to the outer leaflet of the plasma membrane, thereby exposing PS to the external cellular environment. Annexin V is a 35-36 kDa Ca2+ dependent phospholipid-binding protein that has a high affinity for PS, and binds to cells with exposed PS. Annexin V may be conjugated to fluorochromes including Phycoerythrin (PE). This format retains its high affinity for PS and thus serves as a sensitive probe for flow cytometric analysis of cells that are undergoing apoptosis. Since externalization of PS occurs in the earlier stages of apoptosis, PE Annexin V staining can identify apoptosis at an earlier stage than assays based on nuclear changes such as DNA fragmentation.

The following protocol is provided as an illustration on how PE Annexin V may be used on a cell line (Jurkat).

PE Annexin V is used to quantitatively determine the percentage of cells within a population that are actively undergoing apoptosis. It relies on the property of cells to lose membrane asymmetry in the early phases of apoptosis. In apoptotic cells, the membrane phospholipid phosphatidylserine (PS) is translocated from the inner leaflet of the plasma membrane to the outer leaflet, thereby exposing PS to the external environment. Annexin V is a calcium-dependent phospholipid-binding protein that has a high affinity for PS, and is useful for identifying apoptotic cells with exposed PS. 7-Amino-Actinomycin (7-AAD) is a standard flow cytometric viability probe and is used to distinguish viable from nonviable cells. Viable cells with intact membranes exclude 7-AAD, whereas the membranes of dead and damaged cells are permeable to 7-AAD. Cells that stain positive for PE Annexin V and negative for 7-AAD are undergoing apoptosis. Cells that stain positive for both PE Annexin V and 7-AAD are either in the end stage of apoptosis, are undergoing necrosis, or are already dead. Cells that stain negative for both PE Annexin V and 7-AAD are alive and not undergoing measurable apoptosis.

1. Wash cells twice with cold PBS and then resuspend cells in 1X Binding Buffer at a concentration of 1 x 10^6 cells/ml.

5. Add 400 µl of 1X Binding Buffer to each tube. Analyze by flow cytometry within 1 hr.