Panel design can be a difficult and time-consuming process but is essential to obtaining good data. The BD Horizon™ Guided Panel Solution (GPS) provides a guided workflow for reagent selection based on the principles of panel design. This tool will help you streamline the panel design process and avoid reagent selections that may negatively affect population resolution.

How the tool works

The more accurate the inputs are, the more likely the tool will be able to provide relevant outputs. It is also important to note that the tool will not be able to detect every possible reagent selection that may negatively affect resolution, so we cannot guarantee that the panel designed will perform optimally. Additionally, even good panels can have alert messages. This is especially true with higher order panels for which it may be difficult to avoid spectral overlap between reagents. In this case, the tool will allow you to see which populations are most likely to be negatively affected by the reagent selections and trade offs can be assessed.

If you would like to get expert advice prior to running your panel or if you have questions about the data obtained from your panel, our Technical Support team is readily available, just email ResearchApplications@bd.com.

In order to use the tool, you will need to have an account on the bdbiosciences.com site. This allows you to save and manage panels to your account.

We welcome feedback on the tool so we can make improvements in later versions.

Name your panel and provide any important notes.

Define Markers: Here you will enter the target species, panel markers and their "type." The reagent type denotes the expression pattern of each marker as defined here. The tool takes this information into account when determining how fluorochrome brightness and spectral overlap may affect resolution. If you have a specific clone that you would like to use, you may select it from the clone drop down menu. If you select a clone, only reagents available for that clone will be displayed.

You may also create a Resolution Impact Matrix for your instrument by clicking “Create RIM” under “Resolution Impact” and following the instructions. You will need to collect data for each channel on your instrument and upload into the tool. The tool will transform the data into a heat map that can be used to note fluorochrome combinations that may cause resolution issues. Additionally, the tool will use the RIM data to provide alerts when fluorochrome combinations have been chosen that may negatively affect population resolution. Data for each fluorochrome should be collected in order to create the RIM. This data can be generated using the CD4 Fluorochrome Evaluation Kits (Human: Cat No. 566352, Mouse: 566644) which contain CD4 conjugates in >25 dyes.

In this step, you will make reagent selections by matching markers with fluorochromes. To do so, drag a marker over to the fluorochrome list. You will notice that many of the flourochromes are highlighted in blue. This designates that the marker/fluorochrome combination is available in the BD catalog.

Resolution Impact: A key factor in good panel design is maximizing the resolution of populations, in particular double-positive populations. As shown below, the resolution for a given antigen (fluorescence parameter) is decreased by the spread due to spillover from other fluorochromes. That is, the addition of a reagent may reduce the resolution of another reagent, potentially affecting overall population resolution and data quality. Spread is most important when considering reagents for co-expressed antigens. 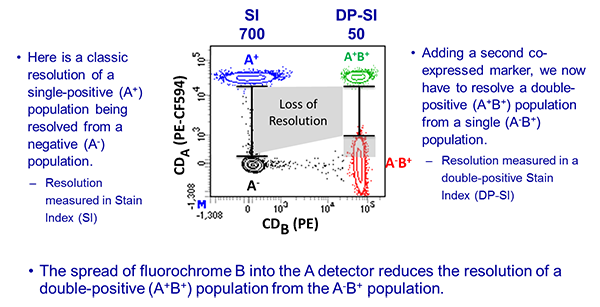 The RIM that is provided in the tool is based on generic instrument platforms and is used for guidance only. The resolution impact of fluorochromes on your specific instrument may differ due to configuration, filters, laser power etc. Therefore, you may want to create a RIM specifically for your instrument. Since the RIM is used to characterize, rather than optimize your instrument, it should be created after the instrument settings have been optimized.

As the number of markers increases, it may become more difficult to design a panel that has no alert messages. The goal is to maximize resolution of the critical population by minimizing fluorochrome selections that may reduce population resolution. Once you are satisfied with the reagent selections, you can move to the next step.

Example of a Population Resolution Alert

This step displays all of the reagents in the BD catalog that correspond to your panel reagent selections. You can select the reagents you want and then export them to an Excel file by clicking the Export button. You may also add the products to a Shopping List or directly into the Shopping Cart for easy purchase.

For Research Use Only. Not for use in diagnostic or therapeutic procedures

Trademarks are the property of their respective owners.