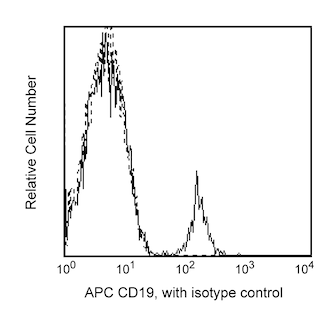 The antibody was conjugated to BD Horizon™ BV786 which is part of the BD Horizon Brilliant™ Violet family of dyes. This dye is a tandem fluorochrome of BD Horizon BV421 with an Ex Max of 405-nm and an acceptor dye with an Em Max at 786-nm.  BD Horizon BV786 can be excited by the violet laser and detected in a filter used to detect Cy™7-like dyes (eg, 780/60-nm filter).

BV786
The BD Horizon Brilliant Violet™ 786 (BV786) Dye is part of the BD Horizon Brilliant Violet™ family of dyes. This tandem fluorochrome is comprised of a BV421 donor with an Ex Max of 407-nm and an acceptor dye with an Em Max at 786-nm.  BV786, driven by BD innovation, is designed to be excited by the violet laser and detected using a filter, centered near 785 nm (e.g. 780/60 nm bandpass filter).  Please ensure that your instrument’s configurations (lasers and filters) are appropriate for this dye.
BV786
Violet 405 nm
407 nm
786 nm
564230 Rev.2
Citations & References