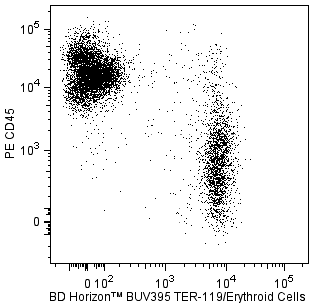 The RI7217 monoclonal antibody specifically recognizes the mouse Transferrin Receptor (TfR, Trfr, or TR), which is also known as Transferrin Receptor protein 1 (TfR1), CD71, and Mammary tumor virus receptor 1 (Mtvr-1 or Mtvr1). CD71 is a ~95-kDa single-pass type II transmembrane glycoprotein that is encoded by Tfrc and expressed on the cell surface as a disulfide-linked homodimer. The CD71 monomer is comprised of an extracellular C-terminal domain with a transferrin binding site followed by a transmembrane region and an N-terminal cytoplasmic tail that is involved in mediating the endocytosis and recycling of the receptor. This receptor mediates cellular iron uptake via endocytosis of an iron-transferrin complex followed by the recycling of transferrin and the receptor to the cell surface. CD71 is lowly expressed on most nonactivated cells including resting B and T lymphocytes. CD71 expression is upregulated on activated and proliferating cells such as mitogen- or antigen-stimulated B cells and T cells as well as some tumor cells. CD71 is variably expressed on erythroid precursors from pronormoblasts (proerythroblasts) to reticulocytes and is absent on mature red blood cells. CD71 is expressed on erythroid precursors that utilize iron for heme synthesis. CD71 can also serve as an entry receptor for several viral infections including those caused by Mouse mammary tumor virus (MMTV). The RI7217 antibody can reportedly be used to inhibit cellular proliferation.

The antibody was conjugated to BD Horizon Red 718, which has been developed exclusively by for BD Biosciences as a better alternative to Alexa Fluor™ 700. BD Horizon Red 718 can be excited by the red laser (628 – 640 nm) and, with an Em Max around 718 nm, it can be detected using a 730/45 nm filter. Due to similar excitation and emission properties, we do not recommend using R718 in combination with APC-R700 or Alexa Fluor™ 700.