Reported ranges for usage in western blot and IHC on frozen sections, is around 5 µg/ml. The antibody should be titrated for each application. Thymus and M1 mouse myeloma cells (ATCC TIB-192) are suggested as positive controls. For immunofluroescent staining and flow cytometry, the directly conjugated formats of this clone are recommended (Cat No. 554221 and 556537). 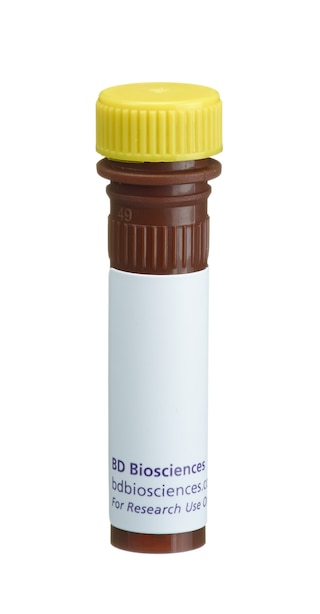 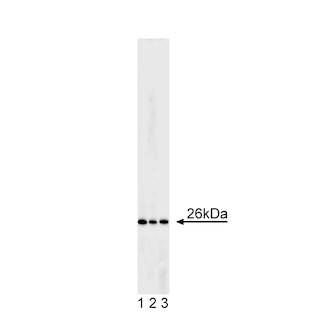 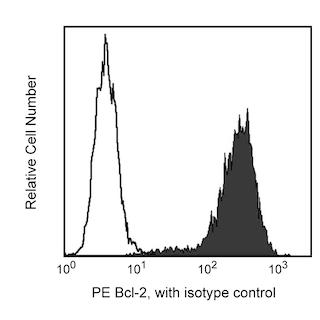 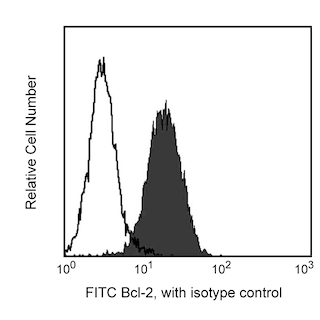 Bcl-2 is considered to be novel among proto-oncogenes because it blocks apoptosis (programmed cell death) in many cell types.  Apoptosis is an active form of cellular suicide that typically requires new RNA and protein synthesis and is associated with distinct morphological changes including cell shrinkage, cytoplasm membrane blebbing, nuclear fragmentation and DNA degradation. The Bcl-2 gene was first found in t(14:18) containing follicular B-cell lymphomas. A high proportion of these lymphomas contain t(14:18) chromosomal translocations involving the human Bcl-2 gene.  Translocation of Bcl-2 sequences from chromosome 18 onto the transcriptionally active immunoglobulin locus at chromosome band 14q32 in B-cells deregulates Bcl-2 gene expression, resulting in high levels of Bcl-2 mRNA and protein expression. Because Bcl-2 blocks apoptosis it may contribute to tumorigenisis by prolonging cell survival rather than by accelerating the rate of cell proliferation.  Mouse Bcl-2 migrates at a reduced molecular weight of ~26 kD.

Purified
Tissue culture supernatant is purified by either protein A/G or affinity purification methods. Both methods yield antibody in solution that is free of most other soluble proteins, lipids, etc. This format provides pure antibody that is suitable for a number of downstream applications including: secondary labeling for flow cytometry or microscopy, ELISA, Western blot, etc.
Purified
554218 Rev.7
Citations & References