The monoclonal antibody was purified from tissue culture supernatant or ascites by affinity chromatography. The antibody was conjugated with biotin under optimum conditions, and unreacted biotin was removed. Store undiluted at 4°C.
Show More 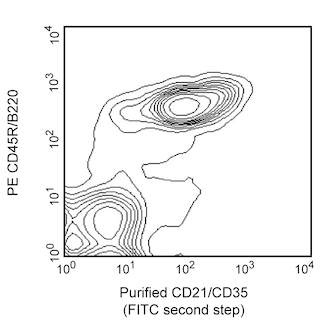 The 8C12 antibody recognizes an epitope present on the 190-kDa complement  receptor protein, originally designated CR1 (CD35), but not the 145-150-kDa CR2 (CD21) molecule.  Unlike the human system, in which these proteins are products of independent genes, both of these mouse receptors are membrane  proteins resulting from the alternative splicing of mRNA transcribed from the Cr2 gene.  Therefore, an alternative nomenclature has been proposed, designating the proteins Cr2-190 (CD21b) and Cr2-145 (CD21a), respectively.  The epitope recognized by 8C12 mAb is only present on CD35/CD21b.   Moreover, it has also been proposed that Crry is the true mouse genetic homologue of human CR1 (CD35).  In the mouse, CD35 is expressed on the majority of peripheral B cells, on the majority of resident peritoneal macrophages, on peripheral blood granulocytes after treatment with N-formyl-Met-Leu-Phe, and on follicular dendritic cells, but not on thymocytes, T cells, erythrocytes, or platelets.  In addition, it has not been detected, at the protein or mRNA level, in the macrophage cell line J774, bone marrow-derived macrophages, or thioglycollate-elicited peritoneal macrophages.  The 8C12 mAb has been reported to inhibit rosette formation by C3bbearing sheep erythrocytes,  to block the complement-dependent trapping of immune complexes by follicular dendritic cells,  and to down-regulate mouse CD35 expression upon in vivo application,  inhibiting only some primary antibody responses to immunization.  B lymphocytes of Cr2[null] mice display impaired humoral immune responses in vivo.  The 8C12 mAb recognizes an epitope on mouse CD35 distinct from the epitope recognized by anti-mouse CD21/CD35 mAb 7G6, and it does not block binding by 7G6 mAb to CD35.

Biotin
Biotin is a ubiquitous co-factor (also known as Vitamin B7) that has many properties that make it extremely useful for molecular biology. Biotin has an extremely high affinity for the Avidin family of proteins (Kd = 10-15 M), making it the perfect tool to link two molecules. Biotin labeled antibodies can be combined with any number of Avidin-conjugated probes in order to customize an assay to a particular need. This is especially useful in the case of magnetic cell separation using streptavidin/magnetic bead conjugates, or in the case of flow cytometry using streptavidin/fluorophore conjugates.
Biotin
553816 Rev.7
Citations & References