The monoclonal antibody was purified from tissue culture supernatant or ascites by affinity chromatography. The antibody was conjugated with BD Horizon™ V450 under optimum conditions, and unreacted BD Horizon™ V450 was removed. Store undiluted at 4°C and protected from prolonged exposure to light. Do not freeze.
Show More 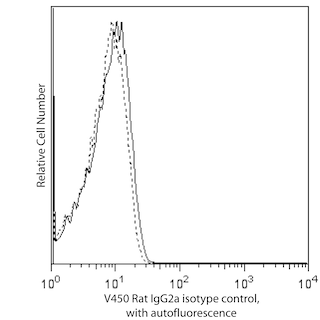 V450
BD Horizon™ V450 Dye is part of the BD Horizon™ violet family of dyes. This is a small organic fluorochrome with an excitation maximum (Ex Max) at 405-nm and an emission maximum (Em Max) at 450-nm. BD Horizon™ V450, driven by BD innovation, is designed to be excited by the violet laser (405 nm) and detected using an optical filter centered near 450-nm (e.g., a 450/50-nm bandpass filter). The dye can be excited by the UV (355-nm) laser resulting in cross-laser excitation and spillover. Please ensure that your instrument’s configurations (lasers and optical filters) are appropriate for this dye.
V450
Violet 405 nm
405 nm
450 nm
560376 Rev.1
Citations & References