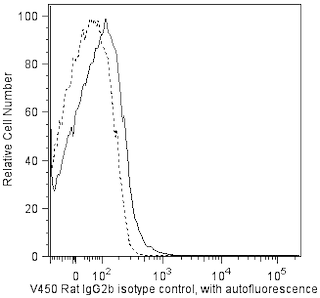 The 2B8 monoclonal antibody specifically binds to CD117 (c-Kit), a transmembrane tyrosine-kinase receptor that is encoded by the Kit gene (formerly dominant white spotting, W). The c-Kit ligand (also known as steel factor, stem cell factor, and mast cell growth factor) encoded by the Kit1 gene (formerly steel, SI), is a co-mitogen for hematopoietic stem cells, myeloerythroid progenitors and a mast-cell differentiation factor. The KitW and Kit1SI mutant alleles have similar pleiotropic effects on the development of melanocytes, germ cells, and the hematopoietic system. In the adult bone marrow, CD117 is expressed on hematopoietic progenitor cells, including CD90 (Thy-1) low, TER-119-, CD45R/B220-, CD11b (Mac-1)-, Ly-6G (Gr-1)-, CD4-, CD8-, and Sca-1 (Ly-6A/E)+ multipotent hemotopoietic stem cells, progenitors committed to myeliod and/or erythroid lineages, and precursors of B and T lymphocytes. This widespread expression of CD117 in hematopoietic precursors is consistent with the participation of c-Kit and its ligand in the regulation of several hematopoietic lineages. Intrathymic expression of c-Kit and c-Kit ligand suggest that CD117 is also involved in the regulation of some events during the development of T lymphocytes. CD117 is also expressed by mast cells and by dendritic cells found in the periarteriolar lymphocytoc sheaths (T-cell areas) of splenic white pulp. The mAb 2B8 reportedly does not block the action of c-Kit. This clone 2B8 had been reported to cross-react with rat.

V450
BD Horizon™ V450 Dye is part of the BD Horizon™ violet family of dyes. This is a small organic fluorochrome with an excitation maximum (Ex Max) at 405-nm and an emission maximum (Em Max) at 450-nm. BD Horizon™ V450, driven by BD innovation, is designed to be excited by the violet laser (405 nm) and detected using an optical filter centered near 450-nm (e.g., a 450/50-nm bandpass filter). The dye can be excited by the UV (355-nm) laser resulting in cross-laser excitation and spillover. Please ensure that your instrument’s configurations (lasers and optical filters) are appropriate for this dye.
V450
Violet 405 nm
405 nm
450 nm
560558 Rev.1
Citations & References