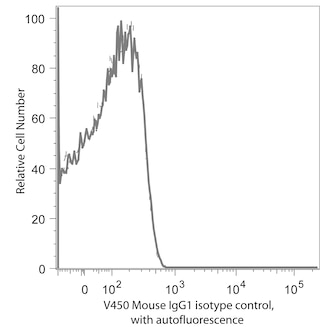 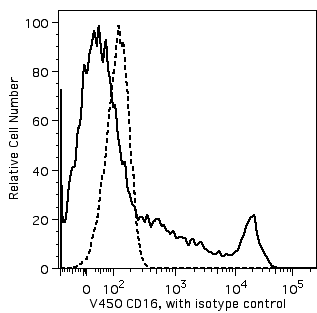 The 3G8 monoclonal antibody specifically recognizes CD16a and CD16b, low affinity receptors for the Fc region of IgG. CD16a is ~50-65 kDa type I transmembrane glycoprotein that is encoded by FCGR3A (Fc fragment of IgG receptor IIIa) which belongs to the immunoglobulin superfamily. CD16a is also known as Fc-gamma RIII-alpha (Fc-gamma RIIIa or FcγRIIIA) or FcRIIIa and is expressed on natural killer cells, activated monocytes, macrophages, γδ T cells, immature thymocytes, and mast cells. CD16a binds immune-complexed or aggregated IgG and associates with CD247/TCRζ in NK cells and FcεRIγ chains in phagocytes and mast cells to transduce intracellular signals. CD16a functions in antibody-dependent cellular cytotoxicity (ADCC) and other antibody-dependent responses including phagocytosis, cytokine production or mediator release. CD16b is a ~48 kDa glycophosyl-phosphatidylinositol (GPI)-linked form that is encoded by FCGR3B (Fc fragment of IgG receptor IIIb). CD16b is also known as Fc-gamma RIII-beta (Fc-gamma RIIIb or FcγRIIIB) or FcRIIIb and is expressed on neutrophils and activated eosinophils. The extracellular region of CD16b is highly homologous to CD16a. CD16b also serves as a receptor for the Fc region of IgG and can bind immune-complexed or aggregated IgG and may be involved in neutrophil adhesion.

The 3G8 antibody also crossreacts with a subset of peripheral blood lymphocytes and monocytes, but not granulocytes, of baboon, rhesus, and cynomolgus monkeys. Multicolor analysis reveals that the distribution on lymphocytes is similar to that found in human studies with the majority of CD16-positive lymphocytes being both CD3 and CD20 negative.

The antibody is conjugated to BD Horizon V450, which has been developed for use in multicolor flow cytometry experiments and is available exclusively from BD Biosciences. It is excited by the Violet laser Ex max of 406 nm and has an Em Max at 450 nm. Conjugates with BD Horizon V450 can be used in place of Pacific Blue™ conjugates.

V450
BD Horizon™ V450 Dye is part of the BD Horizon™ violet family of dyes. This is a small organic fluorochrome with an excitation maximum (Ex Max) at 405-nm and an emission maximum (Em Max) at 450-nm. BD Horizon™ V450, driven by BD innovation, is designed to be excited by the violet laser (405 nm) and detected using an optical filter centered near 450-nm (e.g., a 450/50-nm bandpass filter). The dye can be excited by the UV (355-nm) laser resulting in cross-laser excitation and spillover. Please ensure that your instrument’s configurations (lasers and optical filters) are appropriate for this dye.
V450
Violet 405 nm
405 nm
450 nm
560475 Rev.3
Citations & References