Store undiluted at 4°C and protected from prolonged exposure to light. Do not freeze. The monoclonal antibody was purified from tissue culture supernatant or ascites by affinity chromatography. The antibody was conjugated to Alexa Fluor® 700 under optimum conditions, and unreacted Alexa Fluor® 700 was removed.
Show More 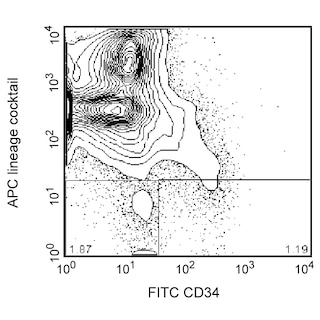 The RAM34 monoclonal antibody specifically binds to the CD34 glycoprotein on the surface of three independently derived mouse CD34-transfected cell lines. RAM34 antibody also reacts with the mouse cell lines PA6, 416B, Swiss 3T6, NIH, 3T3, DA1, and M1, all of which are positive for expression of mouse CD34 mRNA. Cell lines shown to be negative for CD34 mRNA transcript, including WEHI-3B, EL4, 18.8, and CMT64/61, are also negative for surface expression of CD34 as determined by RAM34 staining. Normal thymocytes and splenocytes are negative for CD34 expression. In the bone marrow, 7-10% of cells are stained with the RAM34 antibody, including most of the Ly-6A/E (Sca-1)+ CD90 (Thy-1)low Lineage Marker- hematopoietic stem cell-enriched subpopulation and myeloerythroid progenitors. CD34 is also expressed on a small percentage of fetal liver cells, including NK-cell progenitors. CD34 has been reported to be expressed on the endothelium of capillaries and, in this form, to function as a ligand for L-selectin. Consistent with this observation, RAM34 antibody stains endothelial cells in spleen, thymus, and postcapillary HEVs in the lymph nodes. It is reported that RAM34 antibody can be used to select CD34+ CD117 (c-Kit)+ Ly-6A/E (Sca-1)+ Lineage Marker- bone marrow-derived hematopoietic stem cells, capable of short-term multi-lineage reconstitution of lethally irradiated mice. In  contrast, the  CD34- CD117+ Sca-1+ Lineage Marker- population contains self-renewing hematopoietic stem cells. Similarly, the bone marrow population with high dye-efflux capacity and highly enriched for long-term reconstituting hematopoietic stem cells, is CD34- CD117 (c-Kit)+ Ly-6A/E (Sca-1)+ Lineage Marker-.