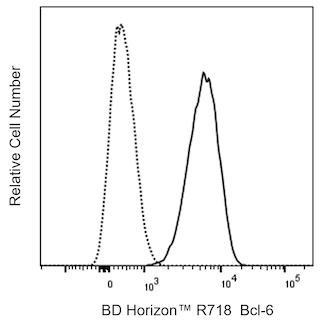 The K112-91 monoclonal antibody specifically binds to Bcl-6. Bcl-6 was first identified as a proto-oncogene frequently deregulated by chromosomal translocations in non-Hodgkin B-cell lymphomas. It is a nuclear transcriptional repressor of the BTB/POZ zinc-finger family of transcription factors. In addition to its roles in cancer, Bcl-6 plays important roles in the differentiation of normal cells including B cells, thymocytes, CD4+ or CD8+ T cells. Bcl-6 is highly expressed in germinal center B cells, where it promotes the germinal center reaction by inducing proliferation and inhibiting the DNA-damage response. Bcl-6 has been identified as a key factor in promoting the differentiation of CD4+ follicular T helper (Tfh) cells that are involved in promoting germinal center formation and providing help to B cells. The interplay of Bcl-6 and another transcriptional repressor, Blimp-1, is thought to be critical in defining the results of both B-cell and T-cell differentiation.