The antibody was conjugated with biotin under optimum conditions, and unreacted biotin was removed. The monoclonal antibody was purified from tissue culture supernatant or ascites by affinity chromatography. Store undiluted at 4°C.
Show More 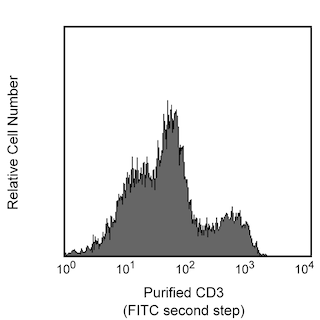 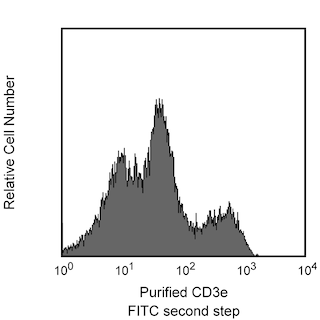 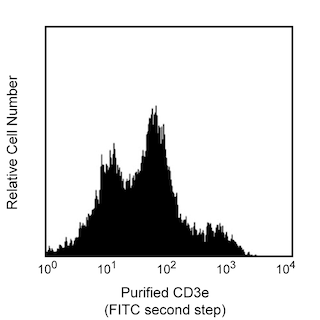 The Kay-10 monoclonal antibody specifically recognizes CD178.1, the Fas ligand alloantigen (mFasL.1, CD95 ligand), which is expressed on activated T lymphocytes of selected strains of mice (eg, C57BL/6, C3H, MRL, NOD, NZB, NZW, and SJL). It does not react with similarly activated T blasts from BALB/c, DBA/1, or DBA/2 mice. It reacts with Cos cells transfected with mFasL cDNA derived from C57BL/6 and C3H mice, but not BALB/c or DBA/2 mice. The Kay-10 mAb efficiently blocks cytotoxic activity of a C3H T-cell line, but not of BALB/c. Phenotypic and genotypic characterizations of mouse Fas ligand reveal the existence of two alloantigens: mFasL.1, recognized by mAbs Kay-10, MFL3(Cat. no. 555291), and MFL4 (Cat. no. 555022); and mFasL.2, recognized by mAbs MFL3 and MFL4. Functional studies suggest that mFasL.2 has higher specific activity than mFasL.1. In the mouse, FasL is expressed on activated T cell lines and in the spleen, testis, and eye. FasL mRNA has been demonstrated at various levels in the bone marrow, thymus, spleen, lymph node, lung, small intestine, testis, and uterus. Moreover, T-cell activators, but not B-cell activators, enhanced the expression of FasL mRNA in splenocytes; FasL mRNA was restricted to the T-cell lineage among a panel of cell lines from lymphoid tissues. Fas ligand is not functional in mice homozygous for the gld (generalized lymphoproliferative disease) mutation; these mice cannot limit the expansion of activated lymphocytes and develop autoimmune disease. Fas ligand is a member of the TNF/NGF family which binds to CD95 (Fas), inducing apoptotic cell death. This Fas/Fas ligand interaction is believed to participate in T-cell development, the regulation of immune responses, and cell-mediated cytotoxic mechanisms. There is mounting evidence that Fas ligand is also pro-inflammatory, mediating neutrophil extravasation and chemotaxis. Fas ligand is released from the surface of transfectant cells by metalloproteinases, and the soluble molecule may block the activities of the membrane-bound molecule.

Biotin
Biotin is a ubiquitous co-factor (also known as Vitamin B7) that has many properties that make it extremely useful for molecular biology. Biotin has an extremely high affinity for the Avidin family of proteins (Kd = 10-15 M), making it the perfect tool to link two molecules. Biotin labeled antibodies can be combined with any number of Avidin-conjugated probes in order to customize an assay to a particular need. This is especially useful in the case of magnetic cell separation using streptavidin/magnetic bead conjugates, or in the case of flow cytometry using streptavidin/fluorophore conjugates.
Biotin
553853 Rev.11
Citations & References