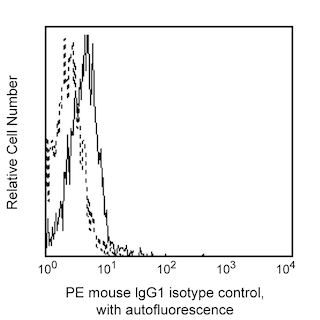 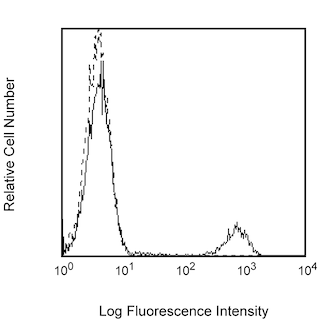 The 11A9 monoclonal antibody specifically binds to CD196, which is also known as CCR6. CCR6 is a seven-transmembrane, G-protein-coupled, glycoprotein receptor that is a member of the beta chemokine receptor family. The human CCR6 gene has been mapped to chromosome 6q27. CCR6 is a receptor for the CC chemokine CCL20/MIP-3alpha/LARC/Exodus and also binds with lower affinity to and mediates responses to beta-defensin2/hBD-2. CCR6 is predominantly expressed by B lymphocytes, certain subsets of effector and memory T cells and by immature dendritic cells but not by monocytes, NK cells, or granulocytes. Skin-homing CLA (Cutaneous Lymphocyte Antigen)-positive memory T cells, Th1 cells, regulatory T cells and IL-17A-producing Th17 cells predominantly express high levels of CCR6. CCR6 mediates the trafficking of T, B, and dendritic cells to epithelial sites near the skin and mucosal surfaces during inflammatory and immunological responses. An N-terminal peptide of human CCR6 was used as an immunogen to generate the 11A9 hybridoma. The 11A9 antibody does not cross-react with human CCR1, CCR2, CCR3, CCR4, CCR5, CCR7, CCR8, CCR9, CXCR1, CXCR2, CXCR3, CXCR4 and CXCR5 receptors. This antibody is NOT a neutralizing antibody.

PE
R-Phycoerythrin (PE), is part of the BD family of Phycobiliprotein dyes. This fluorochrome is a multimeric fluorescent phycobiliprotein with excitation maximum (Ex Max) of 496 nm and 566 nm and an emission maximum (Em Max) at 576 nm. PE is designed to be excited by the Blue (488 nm), Green (532 nm) and Yellow-Green (561 nm) lasers and detected using an optical filter centered near 575 nm (e.g., a 575/26-nm bandpass filter). As PE is excited by multiple lasers, this can result in cross-laser excitation and fluorescence spillover on instruments with various combinations of Blue, Green, and Yellow-Green lasers. Please ensure that your instrument’s configurations (lasers and optical filters) are appropriate for this dye.
PE
Yellow-Green 488 nm, 532 nm, 561 nm
496 nm, 566 nm
576 nm
551773 Rev.5
Citations & References