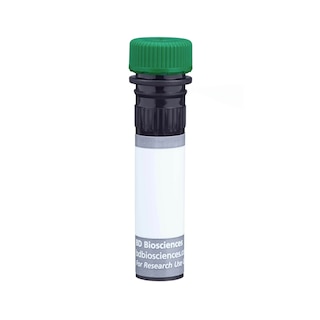 The C71/16 monoclonal antibody specifically binds to mouse CD18 which is also known as the common β2 chain of LFA-1 (CD11a/CD18, αLβ2 integrin), Mac-1 (CD11b/CD18, αMβ2 integrin), and gp150, 95 (CD11c/CD18, αxβ2 integrin).  CD18 is a type I transmembrane glycoprotein. Expression of CD18 is limited to leukocytes, where it is widely distributed in consort with the three integrin α chains (CD11a, CD11b, and CD11c).  Among splenocytes, NK cells have the highest density of CD18, and T lymphocytes express a higher density than the remaining cells. The β2 integrins are important mediators of leukocyte-endothelium interactions.

BUV563
The BD Horizon Brilliant™ Ultraviolet 563 (BUV563) Dye is part of the BD Horizon Brilliant™ Ultraviolet family of dyes. This tandem fluorochrome is comprised of a BUV395 donor with an excitation maximum (Ex Max) of 350-nm and an acceptor dye with an emission maximum (Em Max) at 564-nm. BUV563, driven by BD innovation, is designed to be excited by the ultraviolet laser (355-nm) and detected using an optical filter centered near 560-nm (e.g., a 560/40 or a 585/15-nm bandpass filter). The acceptor dye can be excited by the Blue (488-nm) laser resulting in cross-laser excitation and fluorescence spillover. Please ensure that your instrument’s configurations (lasers and optical filters) are appropriate for this dye.
BUV563
Ultraviolet 355 nm
350 nm
564 nm
741239 Rev.2
Citations & References