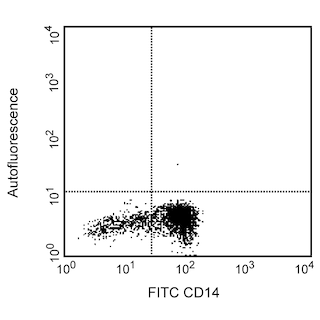 The CW-1.2 monoclonal antibody specifically binds to CD199 which is also known as Chemokine (C-C motif) receptor 9 (CCR9) or C-C chemokine receptor type 9 (C-C CKR-9). CD199 is a ~42 kDa seven-transmembrane protein and member of the G protein-coupled receptor 1 family. CD199 binds to CCL25, which is likewise known as thymus-expressed chemokine (TECK) or small inducible chemokine 25 (Scya25). CCL25 is selectively and constitutively expressed in the thymic cortex and small intestinal epithelium. CD199 is highly expressed on CD4+CD8+ double-positive thymocytes, and mature naïve CD8+ T cells, but not naïve CD4+ T cells, in the peripheral lymphoid organs. CD199 is also expressed on small intestinal B cells, and on subsets of memory CD4+ T cells and CD8+ T cells, and dendritic cells. The CCR9/CCL25 pathway plays important roles in T cell development and gut-associated immune functions. It is especially involved in the recruitment of CD8αα+ intraepithelial lymphocytes (IELs) and the homing of other lymphocytes to the gut. Dysregulation of this pathway is associated with inflammatory responses, such as inflammatory bowel disease (IBD) and celiac disease.

PE
R-Phycoerythrin (PE), is part of the BD family of Phycobiliprotein dyes. This fluorochrome is a multimeric fluorescent phycobiliprotein with excitation maximum (Ex Max) of 496 nm and 566 nm and an emission maximum (Em Max) at 576 nm. PE is designed to be excited by the Blue (488 nm), Green (532 nm) and Yellow-Green (561 nm) lasers and detected using an optical filter centered near 575 nm (e.g., a 575/26-nm bandpass filter). As PE is excited by multiple lasers, this can result in cross-laser excitation and fluorescence spillover on instruments with various combinations of Blue, Green, and Yellow-Green lasers. Please ensure that your instrument’s configurations (lasers and optical filters) are appropriate for this dye.
PE
Yellow-Green 488 nm, 532 nm, 561 nm
496 nm, 566 nm
576 nm
565576 Rev.1
Citations & References