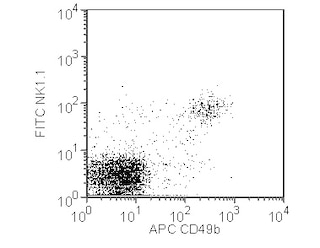 The Ba13 monoclonal antibody specifically recognizes Cell surface glycoprotein CD200 receptor 3 (CD200R3) which is also known as CD200 cell surface glycoprotein receptor-like b (CD200RLb), CD200 receptor-like 3, and OX-2 Receptor 3. CD200R3 is a single-pass type I transmembrane glycoprotein that is encoded by Cd200r3 (CD200 receptor 3) which belongs to the immunoglobulin superfamily (IgSF). It is expressed on basophils and mast cells that are involved in protective immune responses against parasitic infections and in the development of allergic reactions. Cell surface CD200R3 presents as a disulfide-linked dimeric CD200R-like receptor. The cytoplasmic tail region of CD200R3 contains a positively charged lysine residue which allows this receptor to associate and signal through adaptor proteins such as DAP10, DAP12, CD3z, or FcRγ. CD200R3 functions as an activating receptor to regulate IgE-independent immune responses.

PE
R-Phycoerythrin (PE), is part of the BD family of Phycobiliprotein dyes. This fluorochrome is a multimeric fluorescent phycobiliprotein with excitation maximum (Ex Max) of 496 nm and 566 nm and an emission maximum (Em Max) at 576 nm. PE is designed to be excited by the Blue (488 nm), Green (532 nm) and Yellow-Green (561 nm) lasers and detected using an optical filter centered near 575 nm (e.g., a 575/26-nm bandpass filter). As PE is excited by multiple lasers, this can result in cross-laser excitation and fluorescence spillover on instruments with various combinations of Blue, Green, and Yellow-Green lasers. Please ensure that your instrument’s configurations (lasers and optical filters) are appropriate for this dye.
PE
Yellow-Green 488 nm, 532 nm, 561 nm
496 nm, 566 nm
576 nm
567291 Rev.1
Citations & References