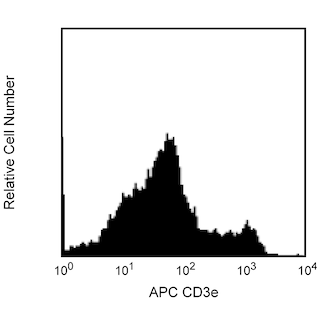 The Ab93 monoclonal antibody (aka, Antibody93) specifically recognizes a common epitope on the extracellular domains of mouse CD16 (Fc gamma RIII/FcγRIII encoded by Fcgr3) and CD32 (Fc gamma RIIB/FcγRIIB encoded by Fcgr2b). Therefore, Ab93 is referred to as an Anti-CD16/32 or Anti-FcgRII/III antibody. CD16 is variably expressed on neutrophils, macrophages, and natural killer (NK) cells whereas CD32 is expressed on B cells, monocytes, granulocytes, platelets and endothelial cells. CD16 and CD32 serve as low affinity receptors for IgG Fc constant regions and are involved in regulating various cellular functions including antibody-dependent cellular toxicity (ADCC), phagocytosis, effector cell degranulation, and B cell proliferation. In addition to identifying CD16- or CD32-positive cells, the Ab93 antibody is useful in phenotyping studies for blocking nonspecific staining due to Fc receptor-mediated binding of other antibodies. Ab93 is also useful in functional studies due to its Fc receptor blocking capability or by its capacity to crosslink Fc receptors leading to signal transduction that triggers cellular responses. Ab93 (Rat IgG2a, λ) and clone 2.4G2 (Rat IgG2b, κ), another mouse CD16/32-specific antibody, reportedly have similar specificities. The differences in the Ig heavy chain or Ig light chain isotypes of these CD16/32-specific antibodies afford flexibility in the design of experimental model systems involving other antibodies.

PE
R-Phycoerythrin (PE), is part of the BD family of Phycobiliprotein dyes. This fluorochrome is a multimeric fluorescent phycobiliprotein with excitation maximum (Ex Max) of 496 nm and 566 nm and an emission maximum (Em Max) at 576 nm. PE is designed to be excited by the Blue (488 nm), Green (532 nm) and Yellow-Green (561 nm) lasers and detected using an optical filter centered near 575 nm (e.g., a 575/26-nm bandpass filter). As PE is excited by multiple lasers, this can result in cross-laser excitation and fluorescence spillover on instruments with various combinations of Blue, Green, and Yellow-Green lasers. Please ensure that your instrument’s configurations (lasers and optical filters) are appropriate for this dye.
PE
Yellow-Green 488 nm, 532 nm, 561 nm
496 nm, 566 nm
576 nm
567020 Rev.1
Citations & References