Consider BD Horizon RealYellow™ 586 (RY586) Reagents, a bright and clean fluorochrome alternative to PE off the yellow-green laser. RY586 can be used alongside PE on spectral cytometers. More Info 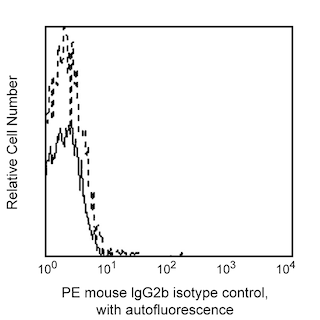 The OKT4 monoclonal antibody specifically recognizes CD4 which is also known as T4 and Leu-3. CD4 is expressed on most thymocytes, T-helper/inducer cells, regulatory T cells (Tregs), and NKT cells. It is also variably expressed on monocytes, macrophages, and some dendritic cells. CD4 is a ~55 kDa type I transmembrane glycoprotein that is encoded by CD4 which belongs to the immunoglobulin superfamily (IgSF). CD4 binds to a nonpolymorphic region of MHC class II and serves as a coreceptor, along with the T cell receptor for antigen (TCR), for the MHC Class II-restricted recognition of antigens on antigen-presenting cells. CD4 also functions as a receptor for human immunodeficiency viruses (HIV). CD4 has four immunoglobulin-like extracellular domains in its extracellular region and a CXCP binding motif for p56Lck in its cytoplasmic domain which regulates the antigen-bound TCR-induced signaling cascade.

PE
R-Phycoerythrin (PE), is part of the BD family of Phycobiliprotein dyes. This fluorochrome is a multimeric fluorescent phycobiliprotein with excitation maximum (Ex Max) of 496 nm and 566 nm and an emission maximum (Em Max) at 576 nm. PE is designed to be excited by the Blue (488 nm), Green (532 nm) and Yellow-Green (561 nm) lasers and detected using an optical filter centered near 575 nm (e.g., a 575/26-nm bandpass filter). As PE is excited by multiple lasers, this can result in cross-laser excitation and fluorescence spillover on instruments with various combinations of Blue, Green, and Yellow-Green lasers. Please ensure that your instrument’s configurations (lasers and optical filters) are appropriate for this dye.
PE
Yellow-Green 488 nm, 532 nm, 561 nm
496 nm, 566 nm
576 nm
566680 Rev.1
Citations & References