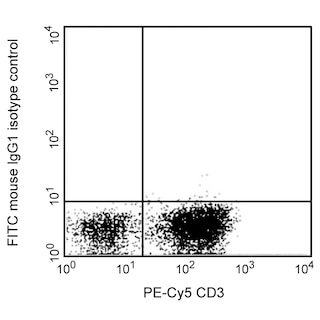 The GHI/61 monoclonal antibody specifically binds to human CD163. CD163 is also known as Scavenger receptor cysteine-rich type 1 protein M130 (M130), Hemoglobin scavenger receptor and Macrophage-associated antigen. CD163 is a 110-130 kDa transmembrane glycoprotein. CD163 is a monocyte/macrophage-restricted antigen expressed on the majority of tissue macrophages and peripheral blood monocytes. CD163 belongs to the scavenger receptor superfamily. Its expression on monocytes is upregulated upon cellular activation. CD163 expression reportedly changes on monocytes and macrophages as these cells differentiate. This finding suggests a role for this molecule in the differentiation and/or regulation of monocyte and macrophage function. CD163 may play a role in the clearance and endocytosis of hemoglobin and haptoglobin complexes by macrophages.

It has been reported (Maniecki et al., 2011) that the presence of calcium impacts the binding affinity of clone GHI/61 to CD163. There is a variation in detecting CD163 positive monocytes when the cells are prepared with different anticoagulants, where heparin was observed to have the highest inhibitory effect on clone GHI/61.

FITC
Fluorescein (FITC) is part of the BD blue family of dyes. This is a small organic fluorochrome with an excitation maximum (Ex Max) at 494-nm and an emission maximum (Em Max) at 518-nm. FITC is designed to be excited by the Blue laser (488-nm) and detected using an optical filter centered near 520 nm (e.g., a 530/30-nm bandpass filter). Please ensure that your instrument’s configurations (lasers and optical filters) are appropriate for this dye.
FITC
Blue 488 nm
494 nm
518 nm
563697 Rev.1
Citations & References