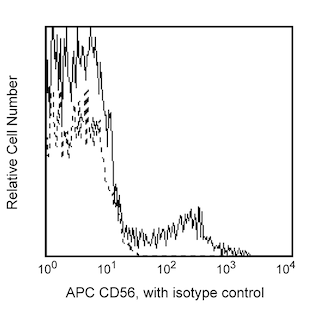 The DX12 monoclonal antibody specifically binds to human CD161 which is also known as Natural killer cell surface protein P1A (NKR-P1A). CD161 is encoded by the KLRB1 (Killer cell lectin-like receptor subfamily B member 1) gene. CD161 is a member of the C-type lectin superfamily and is also referred to as C-type lectin domain family 5 member B (CLEC5B). CD161 is a 80 kDa disulfide-linked homodimer, type II membrane glycoprotein. CD161 is expressed mostly on NK cell populations and on subsets of CD4+ and CD8+ αβ T cells, NKT cells and γδ T cells. Reports indicate that CD161 is expressed preferentially on CD45RO+ T cells, however, it can be found on a subset of thymocytes and fetal liver T cells. Its function has not been fully elucidated, but reports indicate that NKR-P1A may serve as a specific receptor for some NK cell targets. The DX12 antibody can reportedly inhibit spontaneous cytotoxicity mediated by certain NK cell clones.

The antibody was conjugated to BD Horizon™ BV650 which is part of the BD Horizon™ Brilliant Violet™ family of dyes. This dye is a tandem fluorochrome of BD Horizon™ BV421 with an Ex Max of 405-nm and an acceptor dye with an Em Max at 650-nm.  BD Horizon™ BV650 can be excited by the violet laser and detected in a filter used to detect APC-like dyes (eg, 660/20-nm filter).  Due to the excitation and emission characteristics of the acceptor dye, there will be  spillover into the APC and Alexa Fluor® 700 detectors.  However, the spillover can be corrected through compensation as with any other dye combination.

BV650
The BD Horizon Brilliant Violet™ 650 (BV650) Dye is part of the BD Horizon Brilliant Violet™ family of dyes. This tandem fluorochrome is comprised of a BV421 donor with an excitation maximum (Ex Max) of 406-nm and an acceptor dye with an emission maximum (Em Max) at 649-nm. BV650, driven by BD innovation, is designed to be excited by the violet laser (405-nm) and detected using an optical filter centered near 650-nm (e.g., a 660/20-nm bandpass filter). The acceptor dye can be excited by the Red (628–640-nm) laser resulting in cross-laser excitation and fluorescence spillover. Please ensure that your instrument’s configurations (lasers and optical filters) are appropriate for this dye.
BV650
Violet 405 nm
406 nm
649 nm
563864 Rev.1
Citations & References