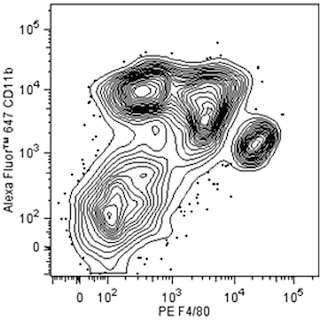 The ZAQ2 monoclonal antibody specifically recognizes CD300LG, a microvascular endothelial adhesion molecule that belongs to the CD300 antigen like family. CD300LG is also known as Nepmucin (a not expressed in Peyer's patches mucin) and CMRF35-like molecule 9 (CLM-9). Four isoforms of this type I transmembrane glycoprotein have been described that are encoded by Cd300lg. The extracellular region of this sialomucin contains one IgV-like domain and one mucin-like domain followed by a transmembrane region and an intracellular tail. The ZAQ2 antibody recognizes the Ig domain of CD300LG (Nepmucin). This sialomucin is variably expressed on the luminal surfaces of endothelial cells lining small arterioles, venules and capillaries in many tissues. Although CD300LG (Nepmucin) protein is expressed by high endothelial venules (HEV) in lymph nodes, it is not expressed by Peyer's patches HEV. Nepmucin mRNA expression has also been observed for some myeloid lineage cell lines as well as CD11c+ dendritic cells, but not purified T and B lymphocytes. HEV-associated CD300LG (Nepmucin) mediates homotypic interactions between endothelial cells. This sialomucin also supports L-selectin-dependent lymphocyte rolling and heterophilic binding of lymphocytes by endothelial cells leading to transendothelial migration (TEM) of lymphocytes. The ZAQ2 antibody can reportedly inhibit lymphocyte TEM. CD300LG (Nepmucin) expression on microvascular endothelial cells is affected by local factors generated in tissues, including sites undergoing inflammation or tumor cell infiltration. This may in turn affect the levels of lymphocytic infiltration influenced by this sialomucin.