For detection of low-density CD25 expression, we recommend the use of the PE conjugate of PC61 antibody (Cat. No. 553866) or the biotin conjugate of the 7D4 antibody (Cat. No. 553069/553070) with a "bright" second-step reagent, such as Streptavidin-PE (Cat. No. 554061). For IHC, we recommend the use of biotinylated 7D4 mAb in our special formulation for immunohistochemistry, Cat. No. 550529. Since applications vary, each investigator must determine dilutions appropriate for individual use. 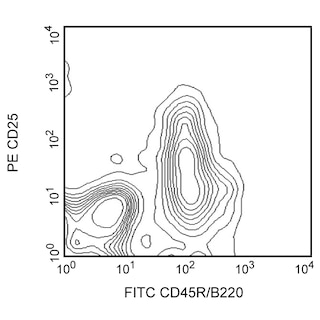 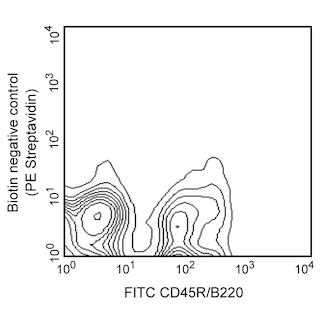 The PC61 monoclonal antibody specifically binds to CD25, the low-affinity IL-2 Receptor α chain (IL-2Rα, p55) expressed on activated T and B lymphocytes from all mouse strains tested. IL-2Rα by itself is not a signaling receptor. However, it can combine with IL-2 Receptor β (CD122) and γc (CD132) chains to form high-affinity, signaling receptor complexes for IL-2. Resting T and B lymphocytes and resting and activated NK cells do not express IL-2Rα. CD25 is transiently expressed at a low level during normal B-cell development in the bone marrow on the CD45R/B220low TdT- sIg- Pre-B/Pre-B-II and CD45R/B220low TdT- sIgM+ sIgD- immature B stages, but not on the CD45R/B220low TdT+ sIg- Pro-B/Pre-B-I stage nor on CD45R/B220high TdT- sIgM+ sIgD+ mature B cells. It is expressed at a higher level during a very early stage of T-cell development in fetal and adult thymus. Peripheral CD25+CD4+ lymphocytes called regulatory T (Treg) cells are involved in the maintenance of self-tolerance. It has also been reported that dendritic cells express CD25, recognized by mAb 7D4. The PC61 antibody recognizes an epitope of CD25 which is distinct from the IL-2 binding site and from those recognized by mAbs 3C7 and 7D4. It blocks binding of IL-2 to CD25, presumably by inducing a conformational change in CD25.

Purified
Tissue culture supernatant is purified by either protein A/G or affinity purification methods. Both methods yield antibody in solution that is free of most other soluble proteins, lipids, etc. This format provides pure antibody that is suitable for a number of downstream applications including: secondary labeling for flow cytometry or microscopy, ELISA, Western blot, etc.
Purified
557425 Rev.12
Citations & References