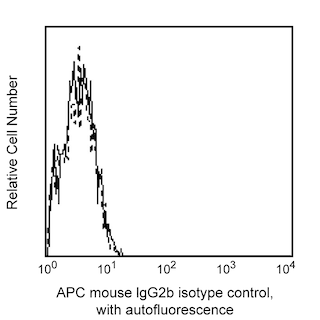 The FLI8.26 monoclonal antibody specifically recognizes CD32 which is also known as Fcγ receptor type II (FcγRII). CD32 is a type I transmembrane glycoprotein that serves as a low affinity receptor for aggregated IgG. The FLI8.26 antibody recognizes a, b, and c forms of CD32 that are encoded by separate genes: CD32a/FcγRIIa (FCGR2A), CD32b/FcγRIIb (FCGR2B), and CD32c/FcγRIIc (FCGR2C). These forms are differentially expressed on monocytes, granulocytes, T cells, B cells, NK cells, or platelets. These receptors play various roles in mediating and regulating inflammation and immunity including phagocytosis, cytotoxicity, degranulation, or platelet activation.

APC
Allophycocyanin (APC), is part of the BD family of phycobiliprotein dyes. This fluorochrome is a multimeric fluorescent phycobiliprotein with excitation maximum (Ex Max) of 651 nm and an emission maximum (Em Max) at 660 nm. APC is designed to be excited by the Red (627-640 nm) laser and detected using an optical filter centered near 660 nm (e.g., a 660/20 nm bandpass filter). Please ensure that your instrument’s configurations (lasers and optical filters) are appropriate for this dye.
APC
Red 627-640 nm
651 nm
660 nm
559769 Rev.7
Citations & References