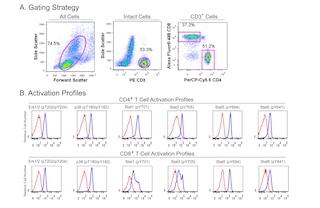 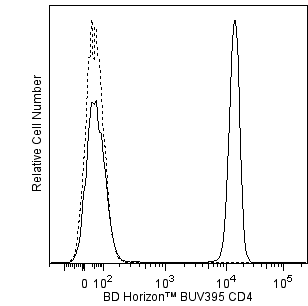 Stat (Signal transducer and activators of transcription) proteins mediate the biological activity of cytokines, including interleukins, interferons, erythropoietin, and growth factors. Ligand-receptor interaction activates constitutively-associated JAK family kinases and subsequent recruitment/activation of Stat proteins by tyrosine phosphorylation. Active Stat proteins then move to the nucleus to promote transcription of cytokine-inducible genes. Seven Stat proteins have been cloned, each of which is differentially expressed and/or activated in a cytokine-specific and cell type-specific manner. Stat5 has been characterized and shown to be encoded by two separate genes, Stat5a and Stat5b, which share over 90% identity at the amino acid level. Stat5a has been shown to be involved in lactogenesis and mammary development, while Stat5b has been shown to be involved in growth hormone signaling and liver gene expression. Both Stat5a and Stat5b are involved in IL-2 induced peripheral T cell proliferation. The peptide hormone, prolactin, binds to the prolactin receptor (PRLR) to initiate the lactogenic response. There are at least three forms of PRLR; however, only the long form activates the 92-kDa Stat5 protein by inducing phosphorylation at Y694. Once phosphorylated, Stat5 becomes an essential transcription factor which binds to the β-casein gene promoter. The presence of an SH2 domain within Stat5 suggests that it may directly interact with protein tyrosine kinases (PTKs) such as JAK2.

The 47 monoclonal antibody recognizes the phosphorylated Y694 of Stat5a. The homologous phosphorylation site in Stat5b is Y699.